Four Stars out of Five 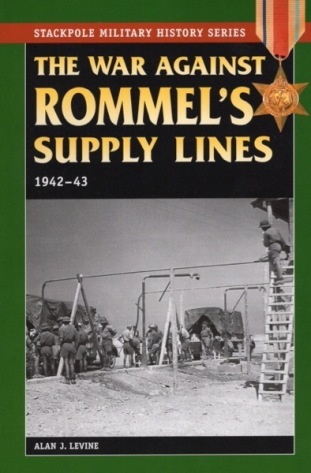 The War Against Rommel’s Supply Lines

This is a very good book providing an in-depth analysis into the battle raging against the umbilical cord tying the Axis forces in North Africa to their base in Italy. In my opinion, no student of the war in the Mediterranean will be able to ignore it.

Thanks go to Stackpole for not only publishing a book that is clearly dealing with a somewhat esoteric topic (why bother with logistics – when you could have the umpteenth 750-page colour book about Waffen SS-Tigers?), but making the effort to create a very attractive presentation, and pricing it very reasonably. Highly recommended.

The book covers the whole of the supply struggle waged in the Mediterranean, but focuses on the period following the Alamein battles and the invasion of North Africa by US and British forces, when it became imperative for Allied planners to prevent a permanent lodging of Axis forces in Tunisia, to the surrender of Axis forces in May 1943. Five out of six chapters are devoted to this effort, while the first chapter provides a concise, yet highly informative and well-researched summary of what went on during 1940-42.

The focus chapters deal with the planning of the invasion of French North Africa, and in particular the role and establishment of 12th Air Force. The author describes well the troubles this formation went through when it was first established, and the very difficult command arrangements at the start of the campaign in Tunisia. The following chapters discuss the invasion, the attack against the build-up of Axis forces in Tunisia, which is rightly described in a very critical manner, the re-organisation of the forces engaged in the logistical battle from January 1943 onwards, and their contribution to the eventual victory. The book gives time to both US and British forces engaged in the battle, and is quite (and justly) complimentary to the Italian effort in keeping the Axis forces in Tunisia supplied.

The author manages well to weave a narrative integrating theatre strategy and individual actions, although at times the information packed into single sentences or paragraphs can become overwhelming. I am also not convinced about the need for as much detail as is sometimes provided and editing could maybe have parsed the text a bit more of unnecessary detail.

The book is very well-researched, going through archival material such as unit records of air formations engaged in the battle, or patrol reports of submarines, and it makes very good use of official histories, of both sides. This is a particularly outstanding feature of the book – where possible, the author made the effort of trying to verify claims made by Allied forces against air and sea targets, by checking the Axis records. While this is no doubt a thankless task, and often a wild goose chase, it is one that cannot be lauded enough. The author has also gone to good length in providing a background on the technical capabilities of the Allied weapons available for the task, highlighting the planes and submarines in particular.

The book sports an index, an extensive literature list, and a good set of endnotes – in other words, it is a serious research work. What is missing is a list of maps, although since there are only two, so maybe that was not considered necessary. Which leads me to: sufficient in number and detail maps are missing, so I recommend having an Atlas of WW2 handy while reading it, unless you have a North Africa map in your head. The selection of pictures is appropriate to the topic, and the quality is acceptable, especially considering the price. What I really would have liked to see are diagrams of air-sea attack formations. These are described verbally, but a picture would help very much in understanding the roles of the various planes engaging shipping targets. But that is really the only major gripe I can think of.