CRUSADER was not exactly an operation that shone a bright light on the genius of the opposing commanders on both sides. Rather the contrary, with the exception of Auchinleck’s bold reaction to the result of the Totensonntag battle (Admission: I do have a lot of time for ‘The Auk’, and consider him one of the great commanders of World War II – he certainly stood head and shoulders and then some over anyone else in the desert, on both sides). 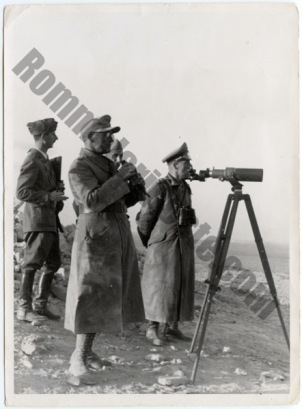 At NARA I have now come across what appears to me to be the most astonishing misreading of the battle, at least as far as I can tell from what I have seen. It shows in my opinion how completely out of touch with events Rommel was during the first two weeks of CRUSADER, until the visit by Montezumolo from Comando Supremo gave him the reality check that he needed to rescue his command, and made him decide to retreat.  The order is from the files of 90th Light and was distributed to all soldiers in the division. Here goes:

The Commander of Panzergruppe Afrika

Order of the Day

The battle in the Marmarica has come to its first victorious conclusion. In uninterrupted heavy fighting against a strongly superior enemy, by 1 December we had destroyed:

127 planes and captured great volumes of war material. Over 9,000 prisoners have been made until now.

Soldiers! This great success is thanks to your toughness and endurance. The fight is not over yet. Therefore continue to advance to finally throw down the opponent!

The war diary of 90th Light has the following entry regarding this communication:

1110hrs – Radio from the Commander in Chief: the battle in North Africa has found its first preliminary conclusion.  This order, which causes great jubilation, is immediately passed on to all units.

One day later the Luftwaffe in Greece was ordered to co-operate closely with the Italian air force to prevent an orderly retreat of the Commonwealth forces by constant attacks, even though Fliegerführer Afrika reported that no signs of a British retreat were seen.

Two days later in turn the order to retreat was given and Panzergruppe Afrika took the long road back to el Agheila. The reaction to this order is not stated in the 90th Light diary.

5 thoughts on “Getting it very badly wrong”