A unit that has attracted a bit of attention disproportionate to its size is Sonderverband 288 (literally: Special Formation 288).  You can find some more information on this unit here (but be careful, not all of the information at the link is correct).  Elements of the unit were ordered across to North Africa from Greece in November, to be included in an ad-hoc unit called Sperrverband Daumiller (blocking detachment Daumiller, named after its commander, Captain Daumiller).  We meet this unit in the Agheila position at the end of December. 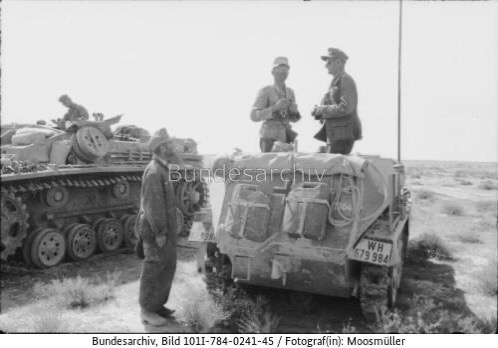 The first transport was by air on 24 November, when 9 Junkers 52 flew a unit of Gebirgsjäger under the command of Hauptmann (Captain) Daumiller to Benghazi, to act there as a blocking detachment. These  were probably initially two platoons of Gebirgsjäger (specialised mountain troops) of a total strength of 90 men, equipped with 25 anti-tank rifles and a ‘plentiful’ supply of ammunition were flown to Africa from Greece in Ju 52. These were the only Gebirgsjäger to serve in Libya throughout the duration of the war 5A regiment of these troops fought in Tunisia in 1943). This transport brought, according to British intelligence, the total of arrivals to 269 men brought in by plane.

The main transport of the day was supposed to happen with two torpedo boats[1], it was planned that at mid-day 24 November (departure time is my guess), the HQ of the Heavy MG Platoon, two platoons of engineers with blocking material and 12 light flamethrowers would be brought over to Derna.  Also 3 anti-tank rifles, 2 5cm Anti-tank guns, and 3 armoured cars. In total 100 men, 24 vehicles and 12 motor-cycles.  Additionally fuel for the vehicles to cover 1,000 standard kilometres (10 consumption units/Verbrauchssätze), and 3 days of rations. However, it is possible that this trip was cancelled, because of the more urgent requirement to bring in fuel on the naval units. Remaining elements could not be transported, but it is likely that this move was later postponed to free the naval units for transport of more important items or because the armoured cars could not be transported on the relatively small torpedo boats.

General Osterkamp, who was then in charge of the sector around Benghazi, appealed for urgent transport of the armoured cars to counter the threat posed by Force E, if necessary by using Junkers 90 heavy transport planes, destroyers, or even a cruiser.

German air command decided that while the remainder of SV 288 should be transported as soon as possible, fuel had to take precedence.

ULTRA intercepts was then stated that 5cm AT guns of 5th Mountain Division should be flown from Crete to Derna. I presume these belonged to Daumiller’s outfit, and they were the first Gebirgsjaeger in North Africa.

It is furthermore pointed out that the unit would not be ready to act as a fully equipped and mobile blocking detachment, because it lacked sufficient vehicles, anti-tank guns and its Sturmgeschütze (Stugs – fully armoured assault guns with 75mm guns), which would have to be transported on a slower transport ship. In the event, these Stugs did not appear in combat until the Gazala battles in May 1942, when one was captured by South African armoured cars.

[1]small destroyers, probably Alcione and Lira, the former was sunk on 11 December by HM Submarine Truant near Crete

5 thoughts on “Transport of Sonderverband 288 to Africa”