In a previous post linked here, I have provided information comparing Italian divisional strength after the CRUSADER battle, comparing it to the authorised strengths of the division.

I recently received Salvatore Loi’s book Aggredisci e Vincerai, the history of the Trieste division.  Most of it is focussed on 1942/43, but there is some good information about the division’s role in CRUSADER in there.  Here I want to use this information to show what the impact of the losses was, by showing the structural change of the division following the battle. 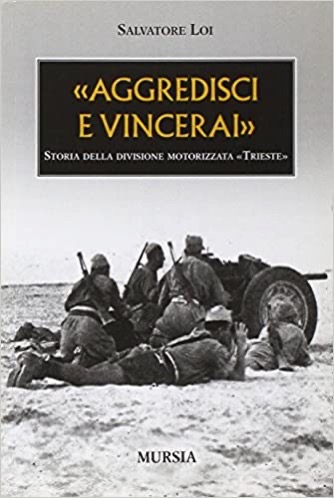 Cover Page of Aggredisci e Vincerai, the history of the Trieste Division.

But first a bit of background on the division. It arrived on the big liner convoys in August and September, and suffered 450 killed when fast merchant Andrea Gritti and the two liners Oceania and Neptunia were sunk. Loi states that the CO of IX Gruppo of 21 Artigliera died when the latter two were sunk by HMS Upholder.

A video of what may well be the convoy carrying Trieste division to its fate is below.

Montanari, the official Italian historian of the war in North Africa, puts the division around Homs in early September, presumably reorganising. It then moved east and on 25 October small elements of the division already undertook patrols towards Rotonda Segnali and Mechili in Cyrenaica. On 8 November the division was established in the sector Bir Hakeim – Bel Harmat – Mteifel el Chebir. There is an interesting diary entry at this link from a subaltern in 66 Reggimento Fanteria. The officer writing the diary was posted missing after CRUSADER, he is in the 66 Fanteria casualty list in Loi.

During CRUSADER, Trieste formed part of the Corporatists Armato di Manovra the Italian Mobile Corps, together with the Ariete armoured division. It was not initially under the command of Rommel, but remained directly sub-ordinated to the Italian high command in North Africa. When things went wrong outside Tobruk the division was rapidly inserted into the siege line, facing east against the New Zealand Division. Its Bersaglieri regiment was in the way during the famous New Zealand night attack.

Based on the information available, I am presuming Trieste lost about 4,000 men.  It is the nature of losses in battle that they fall largely on the infantry, meaning that while the division as a whole may ‘only’ have lost 22%, the effect at the sharp end is likely to be far more pronounced, and this is shown when looking at the structural change of the division after the battle.  In the case of the Trieste division, it started the battle with 7 infantry battalions and 4 battalions of AA/AT (armi di accompagnamento), and ended it with 6 infantry battalions and 0 AA/AT battalions, a 45% drop in frontline strength. Furthermore, the two infantry regiments went from three companies of 81mm mortars to one per regiment, severely reducing their firepower. The regiment most involved in the fighting, the 9th Bersaglieri lost two battalions, one infantry and its AA/AT battalion.  In the process of the battle, the two infantry regiments lost their regimental mixed AT/AA battalions (my guess is that the guys in these battalions were used to make up numbers in the remaining two infantry battalions), and the divisional AT/AA battalion was also dissolved to provide reinforcements at the end of January.

The divisional organisation changed as below by the end of CRUSADER:

* According to a contemporary source provided by Michele Palermo, the  “Battaglione di armi anticarro e di accompagnamento” (=”antitank weapons and support weapons batalion”) in theory had a contingent of about 600 men, and consisted of:

7 thoughts on “Divisione Motorizzata “Trieste” – before and after CRUSADER”