This is only indirectly related to Operation CRUSADER, but of interest nevertheless because it shows the increasing sophistication of Italian escort vessels which happened around the time of the end of the operation, and which probably contributed somewhat to 1942 becoming the worst year for losses in the Mediterranean, with a total of 13 of HM Subs lost, compared to 9 in 1940 (admittedly in just over six months), and 11 each in 1941 and 1942. I have added information on the Italian convoy on 28 May, based on the entry in the Seekrieg website.

P.38, under the command of Lieutenant R.J. Hemingway RN DSC, was sunk by Tp Circe (Tp = Torpediniere – torpedo boat, a class of light escort destroyers), which sank or participated in the sinking of four Royal Navy submarines, HM S/M Grampus on 16 June 1940, HM S/M Tempest and P.38 in February 1942, and HM S/M Union in July 1942. Circe herself was lost on 27 November 1942 in a collision with auxiliary cruiser Citta di Tunisi. Lt. Hemingway was probably awarded his DSC on 20 December 1940 for  what was believed to be a successful action against an Axis submarine (either U-58, or Italian submarines Veniero or Otario) in the Bay of Biscay, while serving on HM S/M Tigris under Lt.Cdr. Bone, DSO, DSC. In reality however Tigris did not sink the target, whichever of the three it was. His previous command was HM S/M H.31, which was lost with all hands on 19 December 1941 in the North Sea.

P.38 was sunk while trying to attack one of the big convoys of early 1942, in this case the third major operation of the year, convoy K.7. It consisted of two separate convoys of six merchants each from Messina and Corfu. The convoys were the fast motor vessels Unione, Monginevro, Ravello (all in convoy 1), and Monviso, Lerici, and Giulio Giordani (convoy 2). They were escorted by destroyers in direct escort (Ugolino Vivaldi, Lanzerotto Malocello, Nicolo Zeno, (all Navigatori-class), Premuda (captured Yugoslav Dubrovnik), Strale (Freccia-class), – convoy 1; Antonio Pigafetta (F), Emanuele Pessagno, Antonio Usodimare, (all Navigatori-class) , Maestrale, Scirocco (both Maestrale-class) – convoy 2) and also by two squadrons of heavy escorts, those of the  old battleship Duilio with the Soldati-class destroyers Aviere, Ascari, Geniere, Camicia Nera, and the heavy cruisers Gorizia and Trento, the light cruiser Giovanni della Bande Nere, and the destroyers Alpino (Soldati), Antonio Da Noli (Navigatori), and Alfredo Oriani (Oriani/Poeti-class).

Convoy 1 was escorted by the Spica-class torpedo boat Pallade, and convoy 2 by Spica-class torpedo boat Circe. Commander of the close escort of convoy 2 was the Captain of the destroyer Antonio Pigafetta.  It appears that only Circe and Pallade were equipped with the German S-Gerät sonar and German depth charge throwers (and maybe also depth-charge rails, since references to depth charges used on Circe use two German separate designations). 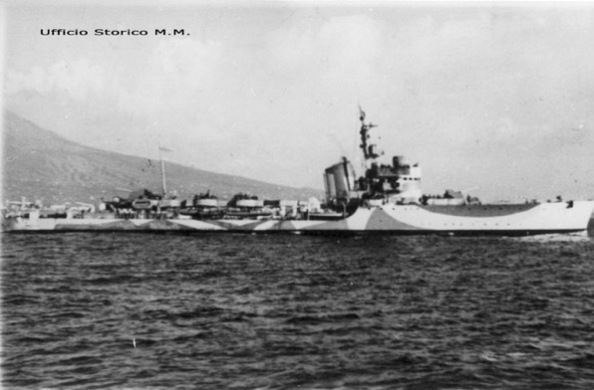 Spica-class Torpedo Boat Circe with dazzle camouflage, which she carried by May 1942. USMM

Here’s the report of her captain, Capitano di Corvette (Lt.Cdr.) Palmas, which is held in the captured German records section in NARA. It can be found in the files of the German Naval Attache in Rome.

REPORT ABOUT THE SINKING OF AN ENEMY SUBMARINE BY TORPEDO BOAT “CIRCE” ON 23.2.42 – ACCORDING TO STATEMENT BY COMMANDER K.KPT.PALMAS

Northwest of Cape Misurate an echo was reported at 1014 [hours] in 46 degrees, 1,800 metres. Bearing wanders out quickly. Signal to convoy to turn to port.

Boat [CIRCE] turns into the bearing, increases speed to 18 – 20 knots and moves across the target. At around 1,000m the periscope is sighted at the position of the echo. With 16 knots moved onto it and dropped six depth charges from rails and four from throwers into the location of the dive which was indicated by air bubbles. Depth setting 70 metres. Shortly after the submarine surfaces with heavy list to stern, it had apparently used pressurised air [emergency surfacing]. Other boats [escorts] and planes open fire and throw depth charges, in some cases in front of other boats. One Italian rating is killed by friendly machine-gun fire. This makes an orderly attack by CIRCE impossible. After the other boats have been called off, CIRCE again receives an echo from the by now again submerged submarine. This resurfaces shortly after like a dolphin with running screws and drops 45 degrees listing to prow into the depth. A lot of oil and air bubbles come up, which only slowly reduce. Apart from that parts of the interior fittings (polished cupboard door, table top), one bag with flags and body parts (lung) drift up.

Boat remains 1.5 hours on the scene of the attack. Echo shows the same location until the last. Water depth 350m. The echo is probably caused by the continuing rising of oil and the still escaping air.

In his formal report to Supermarina, the Italian admiralty, he also analysed the performance of the attack. Below is the section on lessons learnt.

It is clear from this account that P.38 and her crew never stood a chance. The Italian commander made all the right decisions (and risky ones – emptying his depth charge racks could have landed him in trouble if P.38 had survived the first attack), he had advanced detection systems that allowed him to find the enemy (and I wonder if 10th Flotilla on Malta was aware of this – does anyone know?), and his relentless initial attack doomed the submarine.All 32 hands on her were lost. May they Rest in Peace. You can read a bit of background on one of her crew, 22-year old Clarence Durnell, at this link. Before rejoining the convoy escort, Circe made a final gesture to the fallen, according to the report of her commander:

Before I finally move off, I cross the site of the sinking at slow speed and and offer the fallen honourable recognition with the whole crew on combat stations.

The convoy arrived in Tripoli without any losses, and brought much needed reinforcements for the Axis forces in North Africa, allowing them to build up strength for the Gazala battles in May 1942, the conquest of Tobruk, and the advance to El Alamein.

Many thanks for Dili from the Comando Supremo forum for his comments and corrections.