I am in the fortunate position to have a copy of the whole of 15. Panzerdivision’s war diary for the period thanks to a fellow researcher. At the end of it, there is an overview of the losses suffered by the division during CRUSADER and the counter-offensive. It is quite instructive, especially in terms of officer losses, which seem very heavy to me. Number in brackets officer casualties, contained in total number. 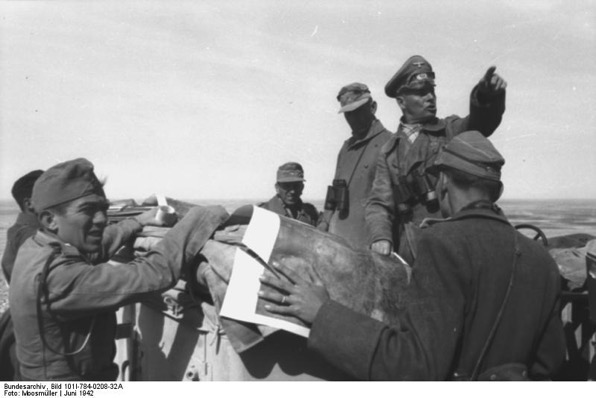 North Africa.- Erwin Rommel mit Generalmajor Alfred Gause und Oberst Erwin Menny; PK “Afrika” Bundesarchiv Bildarchiv Bild 101I-784-0208-32A – while the picture is dated June 1942 (its release date), I am reasonably certain it dates to the counteroffensive in January 1942, or even earlier during Operation CRUSADER. The clothes are what Rommel wore during the winter period. The Bundesarchiv label says it shows Rommel during a visit to Italian troops. This is almost certainly a mislabelling, and it is far more likely to show a visit to the HQ of either 15. Panzerdivision or 15. Schuetzenbrigade.

Five Knights Crosses seem to have been awarded for the battle, to Colonels Menny and and Crassmann on 26 December 41, Captain Wahl on 6 January 42, First Lieutenant Struckmann on 21 January 1941, and posthumously to Major Fenski on 2 January 42 (he fell on Totensonntag).

6 thoughts on “Losses of 15. Panzerdivision during CRUSADER”