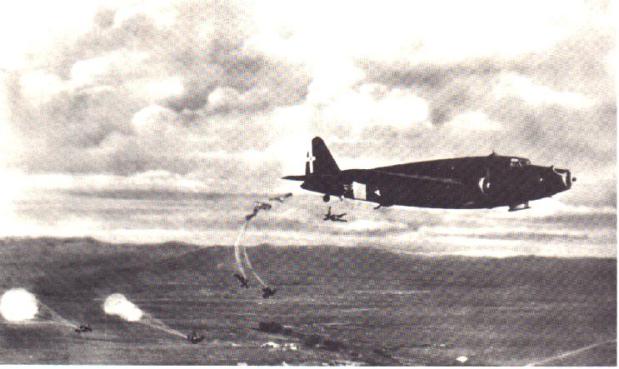 The Royal Carbineers (Carabinieri Reale) are a paramilitary police force under the direction of the Italian Ministry of Defense (see also this link). They have posts in all Italian cities and towns, and provide the guard of honour to the president of the Italian republic. They also lead on anti-Mafia investigations. Carbinieri have been involved in combat in all military campaigns of Italy since the Napoleonic wars in 1815. They were initially set up as a mounted police force.

Apart from their military police duty, only one combat unit of Carabinieri was involved in Operation CRUSADER, the 1st Carabinieri Parachute Battalion, which was formed in 1940, and based at the Italian army parachute school in Tarquinia. The battalion had a short but interesting history in North Africa. The following is a translation from the website dedicated to the Carabinieri Parachute arm, www.carabinieriparacadutisti.it. The translation is done with their very kind permission. I have tried to stay true to the Italian original, hence ‘English’ instead of ‘Commonwealth’.

The 1st Parachute Regiment is established to incorporate the units of this special branch of the armed forces. The first of the three battalions in the regiment is that of the Carabinieri. At about the same time, the command of the 1st Royal Carabinieri Parachute Battalion passes to Major Edoardo Alessi.

Only the Carabinieri Parachute battalion receives the provisional order to depart for North Africa. The carabinieri receive the notice with enthusiasm, even though according to some evidence, this unexpected decision by the Comando Superiori was taken as punishment for some elements less orthodox and respectful towards the regime. Some episodes had in fact possibly led the O.V.R.A., the political police of the fascist regime, to suspect that in the battalion there might be some anti-fascist sentiments: in particular the voices of discontent reported the day after a visit by the Commander of the Army General Staff, General Pietro Badoglio, and finally a parody of a speech by the Duce performed by a second Lieutenant of the Carabinieri Parachutists, named Ragnini, who at the end of a diner on the previous 5 June, given on the occasion of the Carabinieri Day, raised hilarity amongst all those attending, officers of the unit, as well as invited guests, amongst whom also the commander of the Tarquinia School, Colonel Giuseppe Baudoin.

While a Carabinieri Replacement Company remains at the school in Tarquinia to replace the expected losses which the unit may suffer in combat, the battalion disembarks in Tripoli. The unit consists of the staff under the command of Lieutenant Max Ambrosi and three companies under the command of Lieutenants Piccini Leopardi, Giuseppe Casini, and Osmano Bonapace. The total strength is 26 officers, 51 NCOs, and 322 attached and Carabinieri.

The battalion relocates into the desert by a 30 kilometre march from Zavia to Suani ben Aden. The unit has the task of preventing and repulsing attacks by British commandos.(1) During an air attack on Italian Castel Benito airport the first Carabinieri Parachutist, Antonio Bau, is wounded.

The 1st Parachute Battalion Royal Carbineers is subordinated to the command of the Mobile Army Corps (Corpo Armata di Manovra – C.A.M.) and receives the order to transfer to the Jebel of Cyrenaica (Jebel Akhdar), where it takes over a number of strongpoints, including the Presidios (forts) of Lamluda, Derna, and Cirene, where the High Command of Armed Forces in North Africa (Comando Superiore Forze Armate Africa Settentrionale)is located, as well as the anti-commando surveillance of a stretch of the Cyrenaican coast.(2) During this period the battalion engages in a number of encounters with the enemy, amongst which that of 19 November near Cirene deserves particular mention, which ended with the capture of one English officer, one NCO, ten soldiers, and 42 Libyan guerrilla. (3)

On the order by the commander of Panzergruppe Afrika, General Rommel, to Major Eduardo Alessi, the unit reaches the pass of Eluet el Asel, with the task to stop the advance of the British units which, using the roads coming from the inner part of Cyrenaica, intend to cut off the road for the Italian divisions retreating along the Via Balbia.

Start of the Battle of Eluet el Asel (4) The battalion, reinforced by a platoon of parachute assault engineers, some 47/32 guns served by Bersaglieri (5) and one platoon of Libyan Parachutists (6), after having repulsed for a whole day the repeated assaults by a mechanized English brigade (7) fulfils its task and receives the order to retire. Already encircled, during the night it fights to open the road to friendly lines and attempts to force a number of English road blocks. The same enemy, in a transmission by Radio London on 28 December admits that: “The Parachutist Carbineers have fought like lions and never have British units met such a tough resistance.”

At the end of the battle one platoon of the battalion under the orders of Lieutenant Enrico Mollo, remaining isolated and under pressure, decided not to surrender, but, collecting other dispersed soldiers in the present in the area, and operating behind enemy lines for about 60 days. They protected Italian colonists from Arab attacks, as well as sabotaging military objectives despite the English reaction. Finally, in February 1942, they supported the reconquest of the territory by the Italo-German armed forces.

The remnants of the battalion return to Italy and participate in the disbandment ceremony of the unit at the seat of the Territorial Legion in Rome.

The Chief of the General Staff of the Royal Army, General Vittorio Ambrosio, sends a congratulatory letter to the General Command of the Carabinieri, in which he writes: “The CC.RR. Battalion, first of the Italian parachute battalions by date of its formation, and first amongst those experiencing the trial of war, has been able to reconfirm the traditional military virtues of the Arm of Carabinieri, while writing at the same time the first page in the history of the parachutists.”

The following is a shortened version of the events after disbandment:
Two mobile sections were formed on 15 July 1942, one assigned to the Folgore Parachute Division and fighting at Alamein, the other one to the Nembo Parachute Division, and ends up fighting the Germans as part of the reconstituted Folgore combat group after the armistice.
On 23 September 1943 Lieutenant Alfredo Sandulli Mercuro, a survivor of Eluet el Asel, is commanding the 27th Carabinieri Section (Military Police) of the Acqui Division on Cefalonia. He is actively encouraging resistance to the German 1st Mountain Division and is illegally sentenced to death and executed. He received a posthumous Gold Medal for Military Valor (see his citation in Italian at this link).

Footnotes are by Rommelsriposte.com, and our responsibility alone, based on our research. They are not from the text on the Carabinieri Paracadutisti website.