When 7 Armoured Division went into battle, its tanks were camouflaged as trucks, with a contraption called ‘Sunshields’. According to testimony in the history of 2 Royal Gloucestershire Hussars, one of the Cruiser regiments in 22 Armoured Brigade, these camouflage devices were difficult for the driver to navigate with, and after crossing the border they were quickly ‘lost’.

I have until today never seen a picture of what this would have looked like, but Bertram on the Deutsches Afrika-Korps forum just posted a picture. If you click on this link, and scroll down to post no.4 from user SIS 5, and  two follow-on posts from Alan McCoubrey you can see the device in all its glory. 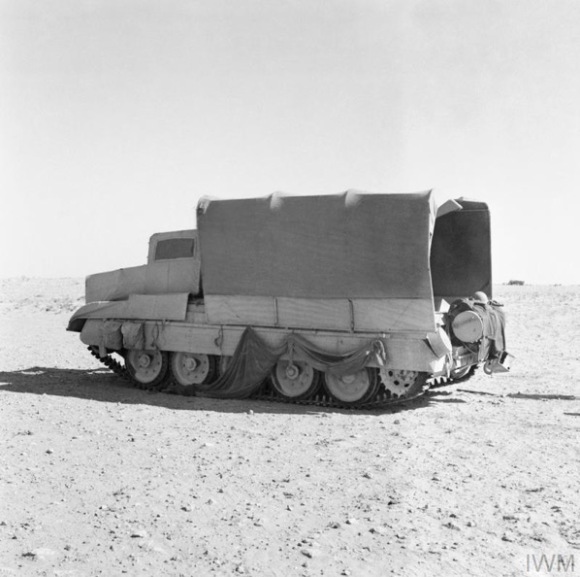 Camouflage and faking tanks was a big pre-occupation of 8 Army, and they were quite successful in it. So successful in fact that the German command (but not the Italian) refused to believe for a few days that a major offensive against them was in full swing.

A short article on the IWM website takes this further at this link.

2 thoughts on “Applying Sunscreen to Tanks”