During the war in North Africa, from summer 1941 onwards, the ability of the Empire to read Enigma messages through the ULTRA intercept programme was a critical aspect in the success of the campaign that was waged against enemy supplies. It also delivered other operational intelligence that allowed Empire air force planners to see how the enemy operated.

This operations report was sent on 23 Nov. 41 at 1730 hrs from Fliegerfuehrer Afrika Ic (intelligence officer) to Fliegerkorps X in Greece, and ITALUFT, the German Luftwaffe staff in Italy. The report was intercepted by the British decoding teams and decrypted at Bletchley Park. It can now be found in the National Archives in Kew, London. I have left the report in the original text, annotated it, and provided a glossary below. I also re-ordered it according to time. 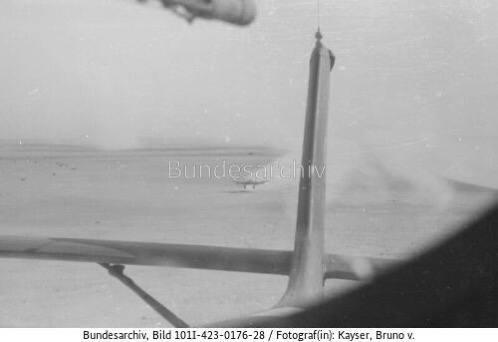 1 Ju.88 of the AFRIKA Kette[1] carried out recce of the tracks BIR EL GUBI – GIARABUB as far as SIDI OMAR. No enemy M/T observed. N.E. of BIR EL GUBI a concentration of about 100 M/T.

18 Ju.87 of I/StG1 attack on field fortifications and a battery position E. of BIR EL GUBI with 6.05 tons of H.E. bombs: bombs on target: effect not observed on account of strong fighter defence: 2 Ju.87 missing. 1 Ju.87 made forced landing, crew wounded but rescued.

1 Ju.88 of the AFRIKA Kette on photographic recce of roads, railways and aerodromes SIDI BARRANI to EL DABA: heavy railway traffic at railhead: aerodromes only partly covered on account of heavy cloud.

[1] This was a small group of reconnaissance planes at the disposal of Fliegerführer Afrika
[2] There was only one field aerodrome in the area, Landing Ground 125, occupied by Hurricanes of No.33 Squadron and Blenheims of No. 113 Squadron
[3] This was likely on 1 South African Brigade which was in the area, ‘masking’ Bir el Gubi and the Ariete division position there. From memory I believe that these attacks were not very effective, even though they were unpleasant.
[4] The losses suffered in these attacks were clearly not sustainable. A loss rate of 20% per sortie must have been extremely worrying. 33% and 16% loss rates in two sorties combine to 8 out of 33 planes lost, or about 25%.
[5] This, together with the losses suffered over target by the Ju 87s, shows that while the Desert Air Force may not have had the number of kills of its adversary, it did achieve its operational objective on this day, which was to inflict losses on the enemy strike force and keep them away from their target, or at least reduce their efficiency.

One thought on “A day in the life of the Luftwaffe – Operations report by Fliegerfuehrer Afrika 23 Nov. 41”