Having purchased some of the RAF Squadron ORBs, I thought it might be interesting to type up what life at the sharp end was like for members of RAF Aircrew. The quotes below are from the ‘Record of Events’ for:

They refer to typical missions. I hope this is of interest.

No. 80 Squadron – this unit was equipped with Hurricanes converted to carry 8x40lb bombs under the wings. They had only converted to ground attack in November 41, and this was the first instance that an RAF Squadron in the desert had been issued this kind of plane. No.402 Squadron at Manston had been converted to the bomber role in October 1941, but carried 250lb bombs, instead of the much lighter bombs carried on the Hurricane Is of No. 80 Squadron. The aim was to be able to have two ‘gos’ at the enemy, first to bomb, and then to ground strafe.

First operation in the morning was acting as close escort to formation of Blenheims which were bombing M.T. and dumps near Bir Hacheim. From 80 Squadrons’ point of view the trip was uneventful, no enemy aircraft being seen. The squadron set off on a bombing and strafing sortie against a semi-permanent camp on the coastal road N.W. of Gambut. The bombing was much more accurate and all bombs fell in the target area. Huts were seen to be wrecked. Pilots then strafed this camp and other tents in this area. The success of the sortie was completely marred by the fact that the Commanding Officer, S/Ldr. T.M. Horger, D.F.C., failed to return. His machine was hit by A/A fire; he was seen to belly land and then walk away from his machine. Hopes were held for his safety as British troops were supposed to be in the area where he crashed. Several other machines were damaged by light A/A fire of which much was encountered. Again it must be repeated that ground strafing will be an expensive business. F/Sgt. Wintersdorff and Sgt. Swire landed in the late afternoon. They had force-landed 30 miles S. of Maddalena; pilots were unhurt and machines undamaged. 6 aircraft of No. 73 Squadron, stationed at Barrani, arrived to operate with 80 Squadron. Nobody seemed to know why or by whom they had been sent.

This was the second bombing sortie, and the first one was not seen as a success in terms of accuracy, and disillusionment about the life expectancy at ground strafing sorties had already set in at the first sortie. It appears to me that the target, a semi-permanent installation (in fact, probably a pretty permanent workshop or supply installation of Panzergruppe) was a proper target more for the light bombers, or even the mediums, rather than the fighter bombers. 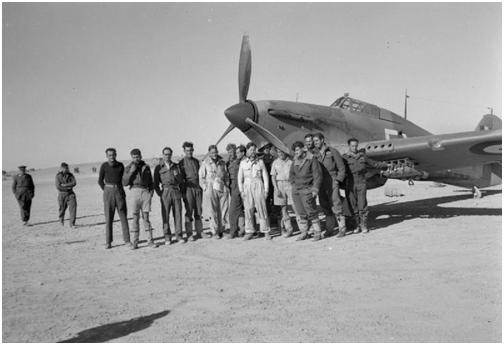 Pilots of No. 80 Squadron RAF gather in front of one of their Hawker Hurricane Mark Is at a landing ground in the Western Desert, during Operation CRUSADER. In the middle of the group, wearing a white flying overall and smoking a pipe, is Squadron Leader M M Stephens, who commanded the Squadron from November until 9 December 1941 when he was shot down and wounded. During CRUSADER, 80 Squadron acted in close support of the Army, their Hurricane fighters being fitted with bomb racks to carry four 40 lb GP bombs, as seen here. Their first effective sorties as fighter-bombers were conducted against enemy vehicles south of Bir el Baheira on 20 November. (From IWM Collection)

No. 107 Squadron – this squadron was equipped with Blenheim light bombers and was based at Luqa on Malta, whence it undertook a range of missions over Italy, Libya, Greece, and the Mediaterranean. These included ground attack against Axis truck columns and railways, shipping attacks, level bombing, and reconnaissance.

Three Blenheims captained by Sgt. Fuller, P/O. Mockridge and Sgt. Crossley were dispatched to attack a m/v in ZUARA HARBOUR.

The three aircraft flying in formation made their landfall exactly off ZUARA so that the defences were warned and opened fire before the Blenheims had crossed the coast. Sgt. Crossley leading the formation passed East of ZUARA, making a tight turn over land and then attacking a large schooner moored against the Western Mole. Altogether there were two schooners, a Hospital Ship and two smaller vessels in harbour.

Sgt. Crossley was seen to hit a stay of the smaller schooner with his wing tip. The aircraft turned over on it’s back and presumably crashed. His bombs fell so close to the schooner that they probably pierced it under the water-line. Sgt. Fuller machinegunned the schooners but his bombs fell short. His aircraft had bullet holes in the fuselage and wings, but was not seriously damaged.

P/O/ Mockridge dropped out of position in the steep turn and attacked the same target from dead astern of the other aircraft. The observer, P/O. Paul was killed by a cannon shell, another went through his tail. The aircraft bombed the larger of the two schooners, results were not observed, but bombs thought to undershoot.

Comments: As No. 80 Squadron had found out, and as can be seen here, low-level attacks were an expensive business for the RAF to engage in. In the seven days from 17-24 December, the squadron lost three planes, piloted by P/O. Keen (17 Dec, attack on transport between SORMAN and ZUARA, unknown cause); Sgt. Hanley (22 Dec, attack on transport 50 miles west of SIRTE, crashed into sea, presumed hit by return fire from an armoured car), and Sgt. Crossley (see above). On the 22 Dec Sgt. Crossley also attacked transport west of SIRTE and carried away some telegraph wire, which indicates how low the Blenheims went in. These raids on minor harbours and on transport on the Via Balbia at random places along the coast must have placed a very heavy load on the Axis defences, necessitating placing AA guns along the harbours, and providing escorts to truck columns far in the rear areas.

While the picture below does not show No. 107 Squadron, it illustrates the nature of the low-level raids very well. 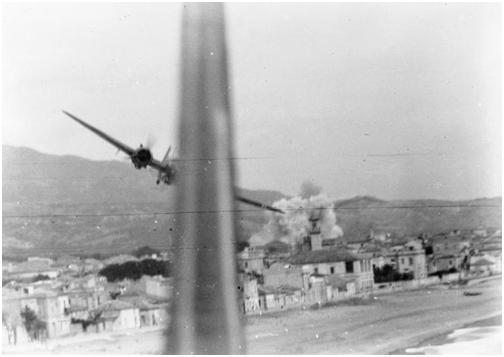 Bristol Blenheim Mark IVs of No. 18 Squadron RAF head back for Luqa, Malta, at low level after bombing a target in the port of Locri, Italy. Photograph taken from the mid-upper turret of the leading aircraft. (From IWM Collection)

No. 108 Squadron – this squadron was equipped with Wellington medium bombers and saw a lot of action on the run to Tripoli. In December it began conversion to heavy bombers, Consolidated B-24 Liberators, but this project was never completed.

Seven aircraft proceeded to A.L.G. El Adem to operate against the enemy. Five operated, the other two returning to base. Captain’s were (“G”) P/O Waddington, (“D”) P/O R.J. Alexander, (“F”) P/O Smith, (“L”) P/O Hill, and (“H”) P/O Duplex. The primary target was a convoy in the Mediterranean, but owing to 10/10th cloud alternative targets were attacked. Aircraft “D”, “G” and “H” bombed Buerat El Haun dropping 12 500lb. tail fused H.E., two 250lb. nose fused H.E., and one 250lb. extension red – only burst were seen. After bombing “D” and “G” came down low and machine gunned tents and M.T. between target and Sirte. Aircraft “F”, owing to 10/10th cloud down to 1,000ft. returned to base with bombs. The cloud was also too thick for aircraft “L” to locate primary target, and so attacked Ras el Ali M.T. dropping four 500lb. tail-fused H.E. and one 250lb. extension red at foot of jetty – bursts were seen 50 yards off M.T. “L” then came down to 2,000ft. and machine-gunned a barge alongside the jetty – this seemed to be hit and returned fire with two machine guns. Quite a lot of A.A. from Sollum was encountered by this aircraft – this was flown over as the Captain thought it was in our hands. All aircraft returned safely to base.

The failed attack on the convoy was a major failure, in that it presented the last chance to do some damage at least to the very important M.43 convoy that brought the reinforcements and supplies enabling the Axis counter offensive later in January. It is of interest to note the bombs of choice for shipping attack, tail-fused, heavy H.E. bombs. I don’t know what extension red means. I think it is very impressive (and brave) to take a large aircraft such as a Wellington down to ground-strafing levels. Sollum was not actually in Commonwealth hands, the pilot probably misread the capture of Bardia to mean that the whole of the border had been cleared out. 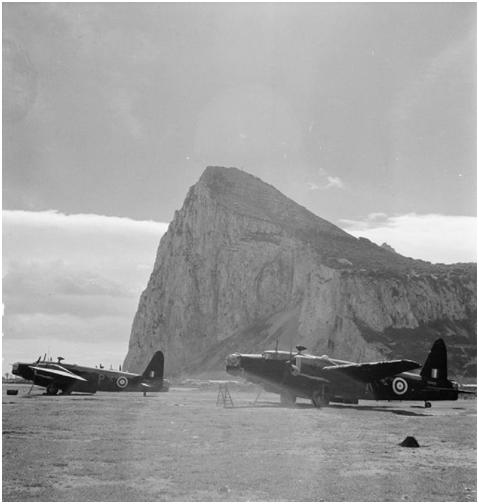 This squadron was equipped with tactical reconnaissance Hurricanes with a fixed camera installation. In a pinch it functioned as a fighter squadron too. It was broken up in a number of smaller flights stationed at various airfields.

“RECONAISSANCE” (Contd.) Despite heavy showers throughout the date a medium Tactical Reconnaissance of the MARADA Oasis and the track north to (X) B. 2218 was carried out. The Pilot reported a small garrison and confirmed previous reports of enemy positions and movement on the track running North. The aircraft encountered severe small arms fire over MARADA, a shell bursting in his outer starboard tank, fortunately this tank was already empty and no loss of fuel or fire resulted and the Pilot was able to continue with his reconnaissance.

Comment: Marada was the southern end of the Axis position, running north to the Med at Mersa el Brega. 13 Corps was concerned that the Axis might have troops there to turn the Commonwealth position in front of the Axis line. The garrison was a small German detachment with Italian armoured car support at this time which had only arrived in Africa a few weeks before, and obviously was quite willing to ‘have a go’.

Click this link to see a No.208 Squadron PR Hurricane. (From IWM Collection)