Last weekend I went to Duxford for the annual Flying Legends Airshow. I found the sky perfect, providing a dramatic backdrop to the planes. Below are some pictures with a desert connection. A CASA licence-built version of the Me 109, equipped with a Merlin engine, a Ju 52 of Deutsche Lufthansa, a P-40F in a striking 1944 Italy paint scheme, B-17 ‘Sally G’ coming in to land, a Swordfish of Royal Navy’s Historical Flight, the business end of a Beaufighter undergoing restoration, a Fieseler Storch. Enjoy!

Next year the Gloster Gladiator is supposed to fly as well, for all you biplane fans!

On the Beaufighter, I discussed the chances of seeing this bird in the air with one of the chaps restoring the Fighter Collection planes. He told me that it was pretty impossible to get her certified in the UK, despite her being 80% complete. Problem is the paperwork, and the UK authorities won’t let her fly without it. Since restoration began about 20 years ago, when paperwork wasn’t considered as important, documentation is the major issue. His view was that the best chance to see her fly again would be through a sale to an Australian or US collection, where requirements are more lenient. Let’s hope for the best! 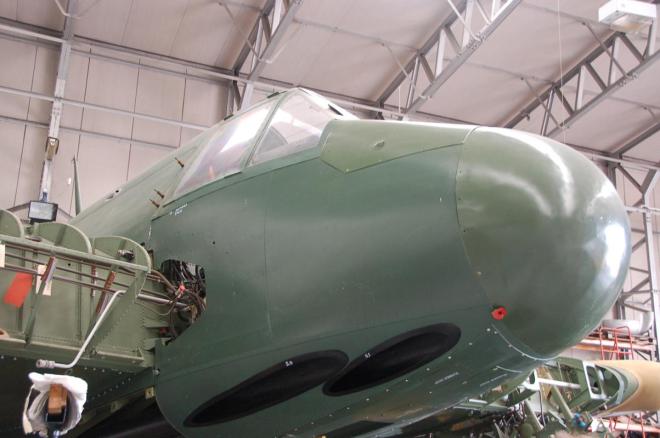