There are a lot of myths about the ‘failure’ of the British Army to use the 3.7″ anti-aircraft gun as a multi-role gun, as the Germans and Italians did with the 88mm AA gun. Quite often there is a claim that this was not allowed. What happened in reality, in my view, is rather that the guns weren’t anywhere near the ground fighting (and neither should they have been), and that the British army valued air defense over ground defense for these guns. One should note that the Axis did not have a free lunch either. Using (and losing) their precious 88mm guns in ground defense roles weakened the in-depth air defense, and allowed the Royal Air Force far more freedom in attacking bases such as Benghazi, Derna, and Tripoli. Nevertheless, I guess this wasn’t appreciated by the UK tank crews at the time. Apart from that, it is also often overlooked that the 3.7″ gun was much heavier and bulkier, and probably not designed for a multi-role use, unlike the 88mm.

In order to lay to rest the myth that it was actually not allowed to use the 3.7″ gun in the ground role or wasn’t used as such until much later in the war, I am posting here an excerpt from a Lessons Learned document of 8 Army, published after Operation CRUSADER.

The Comd 70 Division reports from TOBRUCH that on many occasions during recent operations, 3.7 AA guns were used against ground targets, notably the EL ADEM aerodrome when enemy aeroplanes were seen landing. They were also used for engaging enemy movement, and for counter battery(1) at ranges beyond that of normal artillery, and for night harassing of roads.

Results were very effective. The guns were very accurate, and fragmentation was excellent. Fuzes were set at safety, and no unexploded round was found on subsequent examination of the areas.

Owing to their high rate of fire, these guns were invaluable for use, in conjunction with others, on one minute area shoots on centres of hostile action.

It is interesting to note that in the German instructions for the defence of the HALFAYA position against Tank attacks, all AA guns were given an A.Tk role while Small Arms fire was to be used against attacking aircraft.

The following points however must influence the use of AA weapons in roles other than A.A.:-

(ii) AA ammunition stocks in M.E.F. are not unlimited.

(iii) Carriages are conspicuous tagets in field operations and must be carefully camouflaged.

(1) engagement of enemy artillery positions to subdue the enemy guns.

Gunners cleaning a 3.7-inch anti-aircraft gun near Tobruk, 19 August 1941. Courtesy of the IWM. 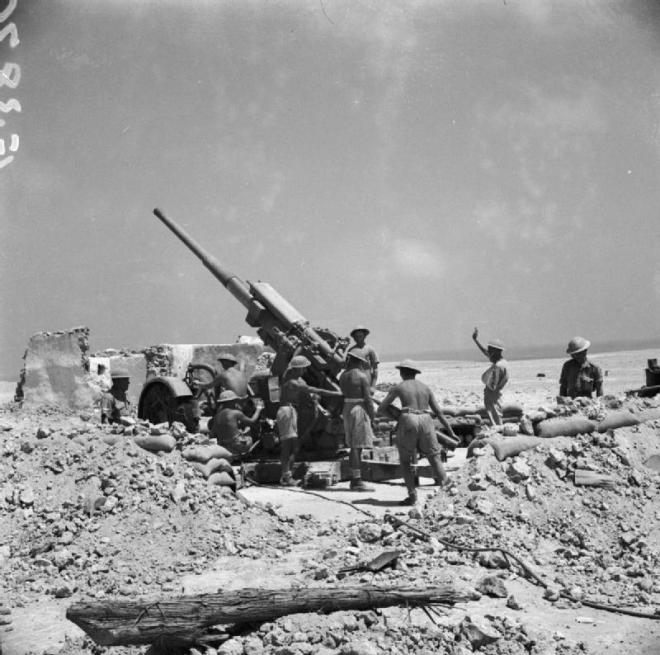 A 3.7-inch anti-aircraft gun in the Western Desert, 27 June 1941. Note the substantial gun crew and the size of the gun. Courtesy of IWM.