Enemy behaves in a very careful manner versus the D.A.K. which advances on B. el Gubi. The enemy elements assigned north and north-west of B. el Gubi evaded in the area south and south-east of it. There are now presumed to be 22 Guards Brigade, 11 Indian Brigade, and 4 Armoured Brigade. During the afternoon, based on radio interception, 1 South African Brigade was brought up to the area northeast B. el Gubi. Furthermore the command staff of 4 Indian Division was recognised.

The lifting of the siege of Tobruk in the south-eastern sector has apparently not been recognised by the English. During the afternoon 5 British transport vessels were noted outside Tobruk. The picture below shows the suspected OOB of 8th Army on 6 December. 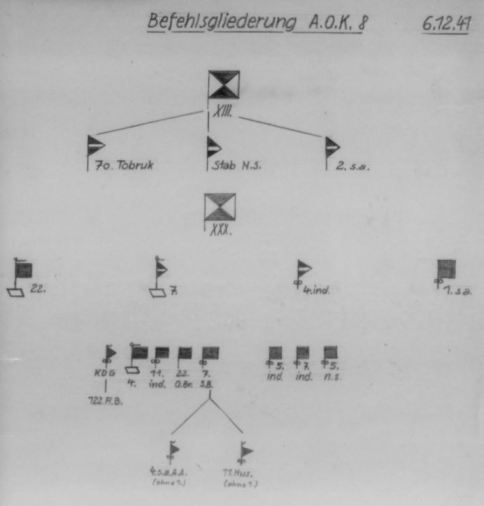