a) The number of enemy tanks destroyed on 28 December increased to 65. In addition 23 armoured cars. The heavily knocked 22nd Armoured Brigade retreated today from the area El Haselat to Giof el Matar and the area southwest of it. Elements of 22nd Guards Brigade advanced on both sides of the track Antelat – Agedabia, closing up to the German-Italian positions. Radio reconnaissance ascertained the Polish Brigade in Beda Fomm, vehicle concentrations there confirmed by aerial reconnaissance. 7th Support Group continues in the area Solluch and west of it. Command Staff 4th Indian Barce, 7th Indian reached Benghazi.

b) Bardia and Sollum front: on 28 December according to radio reconnaissance 120 Blenheims sortied against Bardia. 5th New Zealand Brigade has 42 RTR subordinated to it. Further strong enemy attacks have to be expected, since the opponent is deeply affected in terms of supply by this fortress position.

Immediately subordinated to 8th Army: Gialo and Oasis Groups. According to radio reconnaissance for both moving out has been ordered. 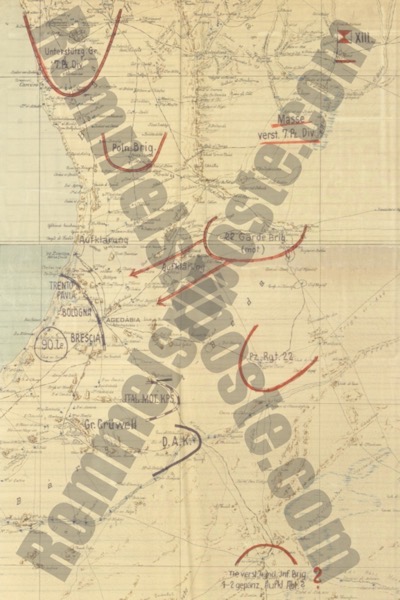