In previous posts I have provided information on German (at this link) and Italian (at this link) tank deliveries to North Africa. At the request of David, here’s an overview of tank reinforcements sent to Egypt. It is broken down by convoy, except for the US deliveries, for which this information is not available. Here instead I have used the closest report to month end (they were issued weekly to the Prime Minister), taken the ‘in theatre’ number for that report, and substracted the ‘in theatre’ number for the previous month-end report. So e.g. for end July 40 M3 Light are reported ‘in theatre’, while for end August 109 are reported. August deliveries are therefore 69. It’s not perfect, but in the absence of convoy information it’s the best I can do. I hope readers find this useful. 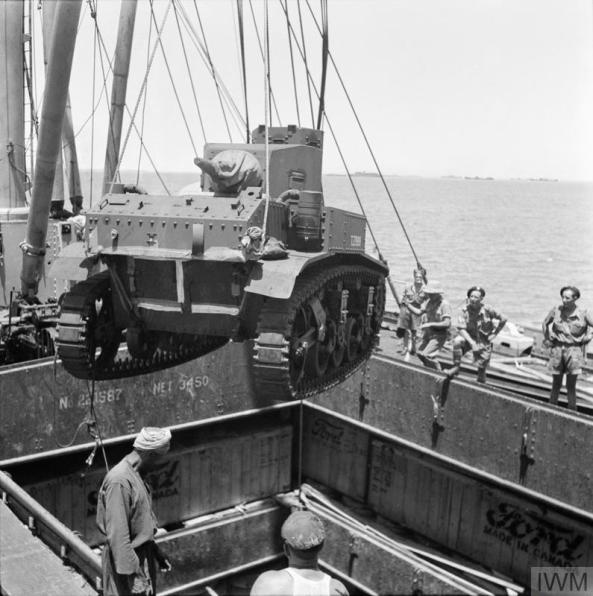 An M3 Stuart Tank being hoisted out of a cargo hold in the Middle East, June 1941. IWM

What is clear from the table below is that the allied supply chain outdelivered the Axis chain by a very considerable margin during this period. In fact, it delivered more tanks in these six months than the Germans managed in the more than two years they shipped tanks to North Africa! The convoys that did this were the W.S. series (nicknamed ‘Winston Specials’). You can find detailed information about the movements and arrival times at this link or at this link. I noted in particular the delivery of 60 M3 light tanks on W.S.12, the only ones to come to Egypt via the UK. I wonder who decided on that…

The Impact of Battle

What is shocking however is to compare the number of deliveries with the number of tanks operational on 7 February, in this older post, and that is where it becomes clear why this high level of deliveries was desparately needed to stay in the game in North Africa.  With 1,184 tanks delivered, and another 356 on hand, substracting the 100 that had been sent to Burma with 7 Armoured Brigade, but adding another 66 M3 Medium that had arrived in the interim, leaves a total of 1,506. Yet on 7 February only 350 were operational, i.e. less than had been operational on 2 July 1941, while another 893 were estimated to undergo repairs and maintenance, and 36 M3 Light were with 10 Armoured Division in Palestine, making for an estimated total of 1,279. This implies 227 total losses, but this was quickly revised upwards, to an estimate of 390 (180 Crusader (sic!), 130 M3 Light, 80 I-tanks). I believe to these losses have to be added the losses of 7 Armoured Brigade and 1 R.T.R., which were equipped with older Cruiser marks, and this would increase losses by another up to 150. By 9 February GHQ M.E. had decided that older Cruiser marks were no longer considered for the tank strength return, since they had become obsolete and/or so worn out not to matter anymore on the battlefield. Total losses of about 540 cruiser and I-tanks sounds believable to me.

In terms of types, I would guess about half of the UK I-tank deliveries would have been Matilda II, the other half Valentines. For the British cruisers, most if not all of them would have been Crusaders, except for one or two Covenanters sent for trial purposes.

On a side note, Churchill was not a happy man about the situation with conflicting tank strength reports, as shown by this rather cranky note of his:

Where are the 120 odd [tanks] which were to have arrived on the 8th [July], and where are the rest of the first 60 Americans? Why did the Minister of State say the other day “We have only 100 tanks fit for action” when you show 211? Are these figures telegraphed from Cairo, or do you make them up here, or do the War Office.

Colonel Jacob probably thought ‘Ouch!’ when he read this.’ His reply then explained the matter a bit further, and is quite clear in what probably went on regarding the difference, explaining that the difference probably related to tanks unloaded from W.S.8(b) and (x), but not yet received by a depot in the Delta, tanks undergoing minor repairs, and excluding the tanks in Tobruk. Still, poor Colonel Jacob could probably have done without this…

Convoy Table of Tank Arrivals by Convoy and Type

5 AA tanks with Besa Quad MG mounts, belonging to 1 Armoured Division, but lent out on arrival to 1 Army Tank Brigade.

6 Number in brackets are M3 Medium tanks received in theatre during the month.