On 3 January 1942 the Air Liaison Officer with 13 Corps sent through a report on operations, including an Appendix on Axis planes found at the various landing groups which had been overrun at this stage. At this point in time, Agedabia and Antelat landing grounds had not been captured, and for some reason the list does not include Sidi Rezegh, where at least 18 planes would have been found (16 were destroyed when the landing ground was taken).

The list includes all planes found on the airfields listed (not all airfields are – e.g. Sidi Rezegh and Magrun are missing), and it is important to note that the wrecks did not necessarily hail from the CRUSADER operation, but could have originated anytime during operations, including the COMPASS offensive earlier in 1941. It is also worth keeping in mind that a good number of these planes would not necessarily have been lost due to enemy action – accidents were a constant hazard, and many planes were thus written off. Finally, the table of course gives only a snapshot, since planes that were lost outside aerodromes would not be considered here.

Planes that almost certainly were lost on current operations were the Me 109F and Mc202 types, as well as a good number of the Ju 88s, while the Breda 88 and Me 109E wrecks most likely preceded Operation CRUSADER. At least one Me 109F was captured in flying condition, and there are some pictures on the net of this plane flying with No. 1 Squadron S.A.A.F.

A note on Mediterranean Air War Vol. I

As an aside, I found the same statistics in Mediterranean Air War Vol. I MAW I) today, but there are some issues I have with the conclusions drawn there. First of all, in addition to the 458 planes below, MAW I also gives numbers for Agedabia and Thamet aerodromes which of course had not been taken at this stage (and Thamet would not be taken until a year later, in fact). These numbers appear to be simply a repeat of the claims made by the S.A.S. for the raids on these airfields in December. The problem with this is of course that these claims were certainly wrong for Agedabia, and probably for Thamet. At Agedabia the S.A.S. claimed 37 planes destroyed, but in reality it was ‘just’ 25. Of course, there probably would have been other planes that had been shot up in strafing raids, or crashlanded. But we simply don’t know, so to state that 37 wrecks were found there is not based on any real evidence.

Furthermore, the conclusion drawn in MAW I is that the number of planes found on the airfields can be taken as a ‘fairly accurate assessment’ of Axis losses. This is of course utter nonsense, and I am perplexed as to why it is stated like this. The only thing it is, is an accurate assessment of the numbers of planes found on the airfields. Any plane that crashed or force-landed away from an airfield is not included in this assessment. The number of planes to whom this happened is without doubt significant (probably in the hundreds since the start of the war in North Africa), so the number of wrecks found on airfields does not tell us anything other than the absolute minimum of planes lost by the Axis between 10 June 1940, and the end of December 1941. In other words, it is quite meaningless. The reason for publishing it below, and why I think it has some information value, is different. I think the statistic shows quite well the range of planes that the Axis used, and who primarily used which airfield (e.g. Benina – German, Berka – Italian), and in some cases we can also clearly tie units to airfields (e.g. Gazala No.2&3 – JG27 with Me 109, Benina – LG1 with Ju 88). 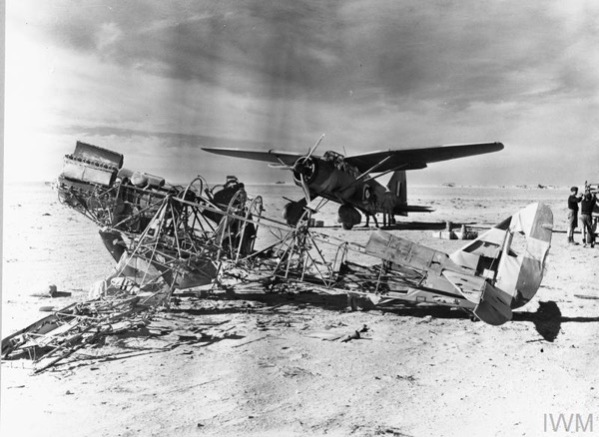 A Westland Lysander Mark II of No. 208 Squadron RAF parked at El Adem airfield, Libya, shortly after its occupation on 5 January 1940. In the foreground are the remains of one of eighty-seven wrecked Italian aircraft found on the airfield. IWM (RAF(ME)576)

Table 1 below has summary data by class of aircraft, while Table 2 is a reproduction of the original table. For some planes it is a bit difficult to classify them. For example, the Cr.42 served both as a fighter and a ground attack plane, and the same was true for the older fighters. The He 111 served both as a ‘hack’ (liaison) plane and as a bomber/torpedo strike plane.

Table 1: Summary of Planes on Overrun Landing Grounds by Class