In the reports from 8th Army HQ submitted by Colonel Bonner Fellers, the US Military Attaché in Cairo, I came across a short entry about what could be the first US soldier killed in ground combat in World War 2.

The date of Sgt. Park’s death is normally given as 27 November, e.g. in the US Army’s official history on Medical Services in the Middle East, but this appears wrong, as the newspaper cuttings make clear, and he seems to have died during an attack on a water/rallying point of 4 Armoured Brigade on the border between Egypt and Libya, when this was overrun by an Axis column during the morning of 25 November 1941, probably 15th Panzer. There were a number of these smaller skirmishes during the ‘dash to the wire’, and not all of them can be traced with certainty.

Location 50-34 places this location roughly at the border between Egypt and Libya, on the Egyptian side, about 8km south at Sheferzen. It suspect that the actual location was Gasr el Abid. 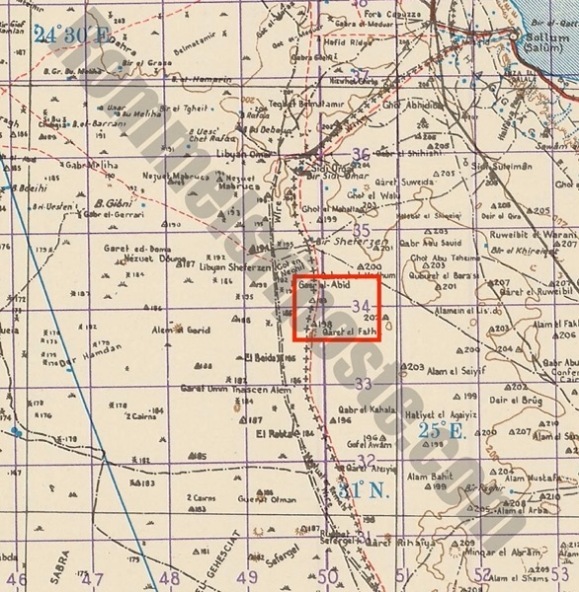 This incident is also covered in the official US Army history of the medical service in the Middle East, which can be found at this link, even though it gets the date wrong.

Military personnel, although not yet engaged in actual combat, were not immune to combat wounds. The first U.S. battle casualty in the Middle East occurred less than a week after Major Sams’s arrival. S. Sgt. Delmar E. Park, a Signal Corps observer and instructor with a British combat unit, was killed by German machine-gun fire near Sidi Omar, Libya, on 27 November 1941, ten days before the United States entered the war. The Signal Corps has erected a plaque to Sergeant Parks memory at Fort Monmouth, N.J. Annual Rpt, Med Dept Activities, USAFIME, 1942, with confirmation from a Signal Corps historian.

Interestingly, nothing can be found about this soldier on the American Battle Memorial Commission website, which should be able to find his grave.

User Orwell1984 from the Axis History Forum dug up the following items, for which I am very grateful:
It’s worth noting that his first name is correctly spelt Delmer and a search under this spelling brings up more information. S.Sgt Delmer Park is buried in Greenwood Memory Lawn Cemetery Phoenix Maricopa County, Arizona, USA, info at this link.

Link to Gettysburg Times May 30 1942 brief article explaining that an American camp in the Middle East “has been named for Sergeant Delmar Park of Phoenix Arizona, American Army tank technician”

Detail on his unit affiliation at this link, again with the wrong date.

Article in the Nevada State Journal Dec 1 1941 (Middle of page):

“He Deserved It”
Italians are Ired over Park’s [sic] death
Rome Nov 30
A United States Sergeant who was killed in Libya last week was fighting with the British and he ‘got what he deserved’, newspaper said today.
La Domenica, the Sunday edition of Lavera Fascista (sp?) said the sergeant’s death proved that President Roosevelt did not keep his promise of not sending an expeditionary force abroad….

It’s interesting to note an earlier article (at this link) in the same paper dated Nov 26 1941 which attributes his death to a mishap and notes his mother has been informed: