No. 90 Squadron R.A.F.’s B-17C Fortress experiment in the desert is an odd story, and below is a bit more history on this, including the initial exchanges that led to the dispatch of the planes, at the request (and insistence) of the Air Officer Commander in Chief (A.O.C. in C.), Air Marshal Tedder. There is some interesting insight in the perception of the early versions of the B-17 and their estimated combat value in these.

Coastal Command in the Middle East

The planes dispatched to the Middle East on the basis of this were operated by a detachment of No. 220 Squadron of R.A.F. Coastal Command. The picture below shows one of them – the caption is copied from the Imperial War Museum page hosting this photo, and contains errors.

Boeing Fortress Mark I, AN532 ‘WP-J’, of No. 90 Squadron RAF/220 Squadron RAF Detachment on the ground at Shallufa, Egypt. Following the Fortress’s unsuccessful period of operations with 90 Squadron in the United Kingdom, four aircraft were detached to the Middle East in November 1941, for night bombing attacks on Benghazi and enemy shipping in the Mediterranean. On 1 December 1941, the Detachment was renamed No. 220 Squadron Detachment and AN532 was returned to the US Army Air Force shortly afterwards. From the IWM Collection (205208879).

First the exchange between the Air Ministry Chief of Staff (C.A.S.) in London, and Tedder:

Referring to your letter to me dated 17/9 suggesting that some of the Fortresses might be sent out to extend your daylight operations in Central Mediterranean am not clear with your proposal is prompted by view of General Brett who may have exaggerated ideal capabilities of Fortresses as seen through American eyes.

Our experience is briefly as follows:

Fortress is well-designed aircraft and Turbo-supercharged engines give her outstanding performance at height but she suffers from many tactical and technical difficulties.

Her average bomb load of 4000 lbs. makes her offensive value small and uneconomical by our standards in relation to the crew and technical maintenance requirements to keep her manned and operating.

Her defensive armament although large in terms of guns is badly mounted and extremely difficult to control. Her chances of success depend entirely on her ability to evade fighters by superior performance at height. Once intercepted Fortress has no chance against modern fighter.

Sperry sight can be used with great accuracy by trained bomb aimers up to 20,000 feet but quality of bombing falls off with height owing to physical and mental strain of operating this complex equipment as cold and rarefied air conditions increase.

Both oxygen and and petrol supplies set limits to operational range and we set this at about 500 miles radius if tactical conditions force aircraft to maintain 25,000 feet or over for any length of time.

We still have only limited experience of operating Fortress at 30,000 feet or over and she is still going through a period of teething troubles and modifications.

Maintenance difficulties are continuous and her high wing and wheel loading make it essential for her to operate from good aerodromes if frequent failures and accidents are to be avoided.

Cannot say how tyres will stand up to hard desert aerodromes but possible that runways will be essential for consistent operations.

In view of these factors would like you to reconsider extent and scope of operations for which Fortress might be used in your Command.

Agree that we could send up to 4 aircraft with trained crews for period of experimental trial. Your better weather and reduced opposition compared to Western Front should favour her employment but maintenance difficulties likely to be limiting factor.

I feel you should not expect too much of the Fortress. Our experience suggests that her value will be mainly in harassing operations for moral effect but material results will be largely fortuitous. Both are likely to be small against effort involved.

Am examining administrating and maintenance projects at once but equipment and spares are on limited scale in U.K. and duplicate sets may have to be sent you from U.S.A. Unlikely therefore that aircraft could be made available fit for full scale trial under one month.

Let me have your further views with these considerations in mind.

And the response by Air Marshal Tedder:

Personal for C.A.S. from Tedder

Your X.251 of Sept. 29. My suggestions re Fortresses based on hope that teething troubles would be nearly over. Brett has only raised question heavy bombers last few fays and is Liberator-minded, not Fortress.

Agree operational limitations are disappointing but even so average bomb load which can be delivered by day is nearly twice what 2 Wellingtons can deliver by night on Benghasi.

I feel that even spasmodic interruption at port by day would greatly increase our effect on enemy supplies added to which would be increased possibility of hitting shipping with precision day bombing.

As regards operating conditions, we have certain large landing grounds in desert where surface is good and run almost unlimited.

I think I am a realist as to what can be expected from new aircraft but would welcome experimental trial as you suggest. 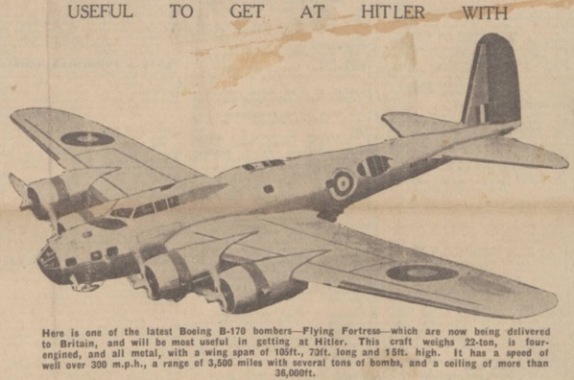 1941 drawing of an early B17 delivered to the RAF, of the type used in the Middle East. Source: Twitter

Another piece in the puzzle can be found in the reports sent by the US military attaché in Cairo, Colonel Bonner Fellers (see here for some background), and one of these is a 1-page memo about the initial missions of the Fortresses against targets in Libya. The missions were daylight missions, so the planes gave the R.A.F. in Egypt another tool, since the existing heavy bomber force, comprised of Vickers Wellingtons, only operated at night. It is likely that this report was read in Rome and also by Rommel, since the code Bonner Fellers’ used for his reports to Washington had been fully compromised.

The memo on the experience is reproduced below:

To Milid, for Arnold from Atkinson, with reference to your cable 198.

November 8: Two planes took off with Benghazi, approximately 1240 miles, as a target. One plane force-landed in enemy territory 200 miles short of return base because of lack of fuel. Crew unhurt. Flying time 5 hours and 55 minutes. Plane and bombsight destroyed. Believe that errors of servicing crew and pilot largely responsible for loss of planes.

November 14: One plane with Benghazi approximately 720 miles as a target. Flying time 4 hours.

November 19: With Derna approximately 860 miles as target, one plane took off. Flying time 4 hours and 25 minutes.

1400 Imperial gallons of fuel and eight 500-pound bombs were carried by all planes.

1. Excessive use of oil by No. 2 and No. 3 engines, as high as 19 quarts from cause undetermined as yet.

2. One engine frozen from gummy substance which analysis revealed to be self-sealing compound from fuel tank

3. Loss of power in engines caused by leak in exhaust manifolds.

4. Bombs hanging in racks – this has been adjusted by putting sleeves on British bombs and using American racks.

In another report dated 26 November, a short mention is made of a raid on Benghazi on 19 November, with a Fortress dropping 3x 1000 pound bombs, with results unobserved. Since that report is from the field, it is possible that there is some confusion and instead of Benghazi it should read Derna.

Finally, there is this concluding communication from Cairo to London, which confirms the issues raised initially by C.A.S.:

Your X.395 10/12 had this in mind and will send Fortresses to Malta as soon as possible.

Engines much overdue overhaul and in view of persistent oil consumption trouble which has made it impossible use them for operations has been necessary overhaul.

Engines overhaul being pressed on but first Fortress cannot be operational for 1 week.

It is not clear to me then when the planes returned to the UK, but there is an indication that at least one was still in the Middle East when it was lost on 10 January to an engine fire (see this discussion). There is some additional information on 12 o’clock high though, thanks to udf_00, at this link. Also, information at this link provided by udf_00 indicates that the last two planes hung around the Middle East until April 1942, when they went to India. Furthermore, there is a recent book (which I haven’t read or held in my hands), which I presume would have some of the operational history of these planes prior to their dispatch to North Africa. To conclude a colour picture of a No. 220 Squadron B-17 Fortress II in flight over the beach of an island in the Hebrides.

A Boeing Flying Fortress Mk IIA, FK186 ‘S’, of No 220 Squadron RAF, based at Benbecula, in the Outer Hebrides, flying past a Hebridean island May 1943. Cropped from the original in the IWM Collection (205018261). This was a much later and more capable model than those sent to the Middle East in 1941.

23 thoughts on “The first B-17C missions in North Africa”