In the spring of 1941, the German navy in the Mediterranean considered the expansion of its capabilities by adding a new type of vessel to support coastal traffic in North Africa, in particular for supply of smaller harbours such as Derna and Bardia, which could not be reached with large merchant vessels. The type of vessel was called a Marinefaehrprahm (MFP), or Naval Ferry Lighter. Because of their ‘F’ class designation, they became known as ‘F-Lighters’ to the Royal Navy.

MFPs were originally designed after the experience with make-shift landing vessels in the preparations for the invasion of the UK in 1940 had shown that a specialist type was needed. The MFPs had a carrying capacity of 70/100 tons in adverse/good weather conditions, or three tanks, and displaced about 200 – 220 tons. They had broad front doors to unload through the bow, and were powered by diesel engines. The initially planned range of 120 nautical miles was quickly seen to be insufficient, and the design range grew to be sufficient to make the 420 nautical mile leg Tripoli – Benghazi without refuelling. The crew consisted of 14 men.

The planned use of the MFP was i) as transports, and ii) as escorts for other slow and unprotected transports. Thus even freight MFPs were reasonably well armed with light AA, captured 7.5cm guns, and depth charges to combat submarines.

2. L-Flottille, a cover name meaning 2. Lehr-Flottille (2nd Instruction Flotilla) instead of 2. Landings-Flottille (2nd Landing Flotilla), was to become the main Kriegsmarine unit under which the MFPs operated in the Mediterranean. It was ordered to be established in mid-August 1941, with a first HQ at Palermo, where the MFPs were laid down at Cantieri Rinuniti Navale, and then Tripoli in Libya, as ordered on 9 October 1941, with a view to having it operate in the Tripoli-Benghazi zone. A total of 30 MFPs were foreseen at this time, in two lots of 15, of which 22 were to be built in Palermo, and eight in Varna, Bulgaria. 15 of these vessels had been ordered in April 1941, to be built in Italy. In October the Italian order was expanded by another 15, and in December another 20 were planned to be built. The intent was to grow the fleet to about 100 vessels.

The first ten MFPs were commissioned in Palermo in November 1941, MFPs F146 to F154 and F160. In the first half of December the remaining five of the first order, F155, to F159 commissioned. The latter two showed how quickly these boats could enter service. They were launched on 6 December, and commissioned on 10 December.

Below are two pictures I came across in NARA a number of years ago. Apologies for the bad quality, the pictures were taken off a microfiche reader screen. They show the first MFP convoy to North Africa, which arrived in Tripoli at the end of November 1941. It consisted of four MFPs, F146, F148, F150, and F160. The four lighters had left Palermo on 22 November 41 to move to Trapani, where I presume they were loaded up for the trip.

These four MFP went across without their 7.5cm guns, which only arrived in Palermo on 2 December 1941. They were subsequently equipped with these I presume. They were also expecting a 2cm AA gun each, from stocks in Benghazi. 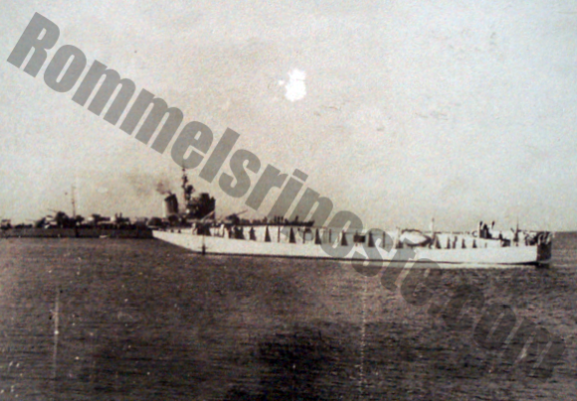 First MFP convoy on the way to North Africa. The escort is the Spica-class torpedo boat Perseo. Rommelsriposte.com collection. 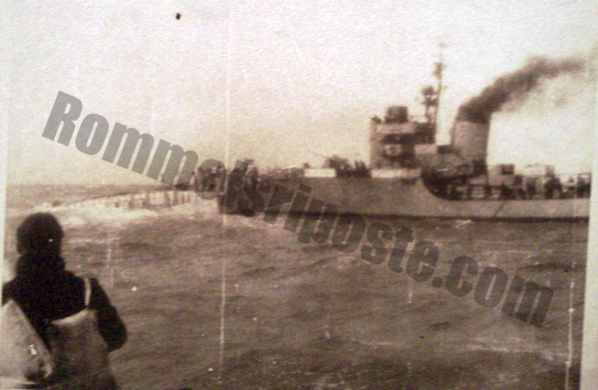 3 December 1941, MFP160 sinking with 400 barrels of fuel and 10 tons of cement and diving gear, after the front loading doors gave way to wave impacts. Perseo is taking the crew off. Rommelsriposte.com collection.

Following arrival at Tripoli, The MFPs were quickly loaded with urgently needed supplies and then dispatched to Benghazi on the coastal route, escorted by the torpedo boat Perseo. The load carried consisted of 800 barrels of fuel, 20 tons Italian cement, Draeger diving gear, 132 tons of equipment, and 20 tons of rations. Heavy weather during the crossing led to the loss of F160, when the bow doors failed. Perseo took off the crew. The remaining three vessels made it to Benghazi but had suffered heavy damage, requiring extensive repairs of up to two weeks, including further reinforcement of the overall structure.

The three survivor, having completed repairs, were then employed on coastal supply duties. They quickly became indispensable to the coastal convoy work. Most interestingly , F150 was sent to Bardia in mid-December to pick up tank engines, and F146 was sent to beleaguered Bardia on 20 December, with 70 tons food, 20 tons ammunition and 2 tons mail. This must have been a somewhat harrowing journey, since the Allies at this point controlled the Libyan coast almost up to Benghazi, and were running supply convoys up to Tobruk. F146 was then ordered to remain in Bardia to ensure supply between Bardia and Sollum. It was lost on 24 December to artillery fire, with all of the crew rescued.

A second batch was sent from Italy with 24 tanks in January, but got stuck at Pantelleria, when there were not sufficient escorts available, and finally reached North Africa at the end of February 1942.

Telegram to Naval Transport Command Italy, with information about the planned trip to Bardia. Rommelsriposte.com collection. 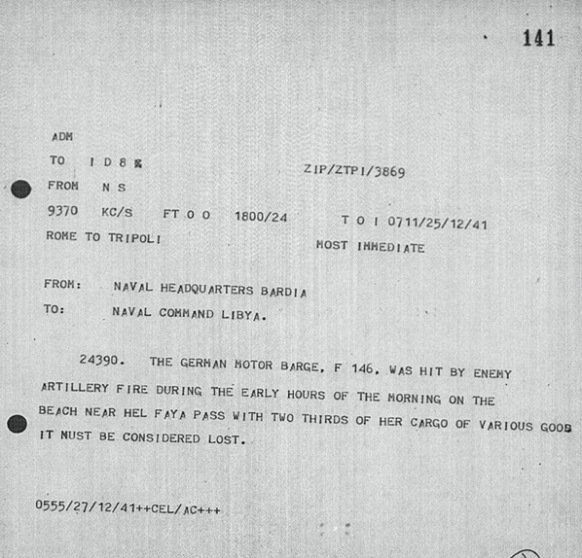 The first 15 MFPs constructed in Italy quickly diminished in number. Information about their fate during Operation CRUSADER is from the Historisches Marinearchiv at this link, and the information on those lost during CRUSADER is below:

Five each were then lost in 1942 and 1943, and the last of this series, F155, ran aground off southern France and became a total loss.