Arrival and Departure of Subordinated Troops. 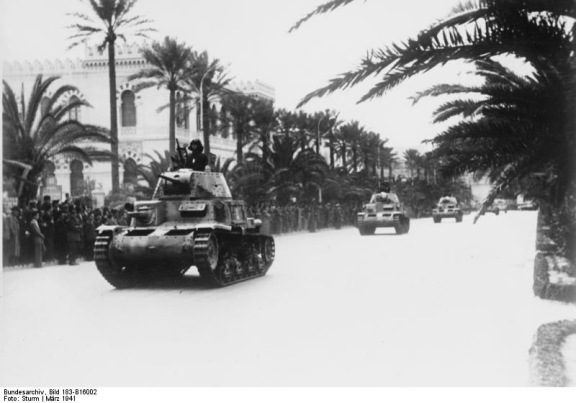 Assessment of enemy position was reported to O.K.H.[1]  in the evening report[2]:

“Based on reports of the last days it’s not excluded that the enemy is fully poised for defence, and has moved back the mass of its forces into the Cyrenaica north and east of Benghazi.”

According to Italian reports Giarabub was strongly attacked. For 21 March support of the defenders by two Ju 88 planned.[3]

The following measures were taken or ordered in this regard:

The plan is to occupy Gialo after the execution of the Mersa el Brega operation[3], and to use the current garrison of Marada for this. It is intended to further reinforce the Battalion Major Appel by additional forces, maybe from the Battalion Santa Maria[4].

3) An advance by de Gaulle troops from French West Africa against Tripolitania was not considered to be of decisive importance. To smash French attempts to attack against Murzuk[5], Air Operation South was requested from Fliegerfuehrer Afrika. Fliegerfuehrer Afrika intends in this regard to stock the airfield Zella accordingly, so that from there simultaneous operations by heavy fighter wings to the east and the south up to the area of Gatrun and south of it could be carried out.

As a first measure, the stocking up of Zella is planned for a one-off Group-level sortie towards south.

Italian air force bombed on 17/18 March the port of Benghazi, and on 18/19 March the airfield at Berka.

[2]These reports were sent every evening, summing up events of the day, and plans for the next day.

[3]The oasis of Giarabub had not been occupied by Empire forces at this stage, but was under siege by a mixed force led by Australians. The entry probably refers to the attack by two companies of Australian 2/9 Battalion on 19 March. The history of the siege from the Australian side can be found at this link.

[5]Murzuk is in the deep south of Libya, close to the border with Chad.

[6]One Wellington was lost during these operations on the night 17/18 March, damaged beyond repair on landing at Benina (Wellington Ic T2732 of No. 70 Squadron), but with no losses to the crew.