Morning aerial reconnaissance on 3 April noted the Via Balbia free of enemy up to 60km north of Agedabia. A group of 20 tanks retreated north at 08.00 hours, 20km east of Agedabia, 30 motor vehicles north and northeat at Sidi Abd el Aati. 10.30 hours single tanks were observed 35km east of Agedabia, probably stopped due to lack of petrol. The impression gained of the enemy was that his retreat north and northeast continued. The Commander in Chief took the decision to unsettle the enemy’s southern flank by a forward detachment in the area of Ben Gania, and forward elements at Tengeder, to ascertain if the English wanted to hold Cyrenaica, and if appropriate to push forward into his rear and flank into the direction of Tmimi.[1]

Since the operation planned for the occupation of Gialo had become superfluous because of the development of the situation, the troops which had been prepared under Lt. Prince Bentheim in Agheila were ordered to move up by an Aide de Camp.

A request was made with the Italian high command for Italian forces to occupy Marada, and 5.lei.Div. was ordered to pull up its units placed there.

Lt.Col. Graf Schwerin, who at 18.00 hours reported to the Corps command post to report about the operation Murzuk, was ordered to take over the lead of the push to Ben Gania, Tengeder. Detachment Santa Maria and Detachment Prince Bentheim were subordinated to him. He commenced the advance on the track to Giof el Matar that same evening with Detachment Bentheim.

A patrol of A.A.3 reported during the morning 3 April reported 20 – 25 tanks 20km north of Cantoniera Zuetina. Lt. General Rommel tasked a reinforced tank battalion with the target B.el Ageredt. Lt. Bernd of the Corps staff, who around mid-day drove north on the Via Balbia by himself with a sidecar motorcycle, reported that these were parked Italian tanks, and Magrun was free of enemy. In the absence of the Commander in Chief the Chief of Staff therefore ordered 5.lei.Div. to prioritise supply of A.A.3 with petrol and rations, and to have it ready for bigger operations at the latest on 4 April.

During the evening Lt.General Rommel drove again to the reconnaissance battalion 20km south of Magrum and ordered to occupy Benghazi, which was free of enemy according to an Italian priest. The Commander in Chief pointed out the special attention to be given to the right flank.

The mass of 5.lei.Div. was on 3 April ready for defense in the area Agedabia – Zuetina, and carried out the replenishment of ammunition, water, and rations. When the division reported at 17.30 hours that it only had fuel remaining for 150km and would require at least four days to replenish, using all available vehicles, the Commander in Chief ordered to send off all supply and combat vehicles that could be done without to bring up petrol in one day and one night from the Arco dei Fileni. (Quote of Lt. General Rommel: “That saves blood and wins us the Cyrenaica.”) To keep roads free for traffic flows officer patrols were used. All columns available were ordered up from Tripoli.

The 5.lei.Div. is therefore immobile for at least 24 hours. It should only keep Aufklaerungsabteilung 3 and one strong forward detachment ready for action. 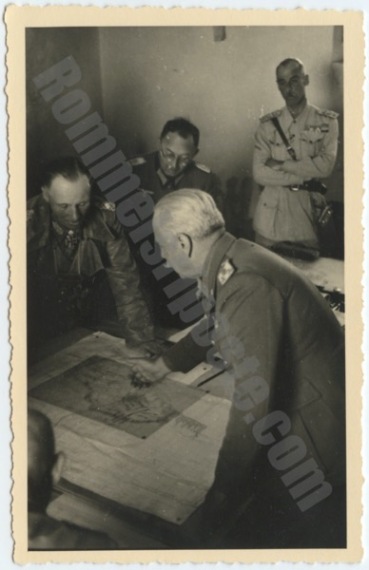 The O.K.[5] confirmed the establishment of the requested five Oasis Companies. They should be ready for departure on 18 May.

[1]A clear violation of the Italian High Command’s instructions and the direct order given by the Italian Commander the night before. Rommel was subordinate to the Italian command.

[5]Probably OKH, but letter is missing in the original.