Arrival and Departure of Subordinated Troops:

Arrived in the operational zone:

According to the information available at the D.A.K., at this time the English did not have immediately available and combat-ready troops to prevent the advance on Egypt. According to aerial reconnaissance, the opponent was very weak at Capuzzo – Sollum, and there were no forces until far behind Marsa Matruh.

The intent of the Afrikakorps was therefore to continue for the moment with the accelerated advance eastward with forward detachments, to defeat all rapidly brought up English reserves in succession, before the enemy[2] was able to pull stronger forces out of Abyssinia or Greece. The mass of the troops should follow after supply had been secured. The precondition for this was the taking of Tobruk, which had to be pursued by all means.

Forward Detachment Knabe and A.A.3 received the order to take Sollum in a joint attack. Additional task: advance on Marsa Matruh. In the van reinforced Kradsch.Batl.15, following this A.A.3 with the task to cover the southern flank and secure the tracks leading to Siwa. At 09.00 hours Col. Montemurro received the order to reinforce the garrison of Bardia with his battalion. The intent was to later bring up the whole of Div.Ariete. The latter’s forward elements arrived at El Adem around 15.00 hours.

Forward Detachment Knabe took Fort Capuzzo at 13.00 hours through an enveloping attack, at 15.15. hours Sollum after now only weak enemy resistance, and afterwards set itself up for defense in this line.

At 18.00 hours the 5.lei.Div. carried out an attack with M.G.Batl.8 and some tanks, supported by Col. Grati’s artillery regiment[3] and I./Flak 18, to take the road junction south of Tobruk which was important as jumping off point for the occupation of Tobruk and as artillery observation point. On the right wing of M.G.Batl.8 it was possible to take the tank ditch and wire barrier, but the objective of the attack was not reached.[4] 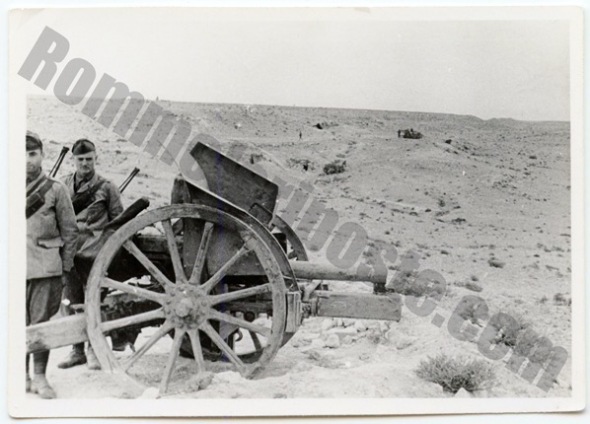 During enemy air attack on the harbour of Tripoli one medium Italian vessel was hit, and burned out.[5]

[1]The original text says ‘Abteilung’, which normally means battalion, but in this case it’s probably just a mistranslation from Italian, and this is the organic Carabinieri (military police) section of the Trento division.

[3]The regiment consisted of one battalion (12 guns) of 100/17 howitzers, and two battalions of 72/27 guns. Both of these types were obsolete First World War models On this day it engaged into an artillery duel with TobFort artillery, taking heavy losses of 9 KIA and 29 WIA of whole 12 severely.

[4]The genesis of the attack, which was to turn into a disaster during the night 13/14, was already fraught with diffficulties. Three runners were killed and two more wounded when it was attempted to distribute the order to rifle companies.

[5]This was the steamer San Giulia, whose bridge was burned, with one officer missing.