An assault team operation by Gruppe Schwerin against the most north-easterly wing of the Tobruk front hit on strong opponent in built-up, wired positions, which could not be broken through.[1] The AA battery in the area of Gruppe Schwerin engaged two small destroyers entering the port of Tobruk, and motor vehicles on the Via Balbia.

Lt. General Rommel on this day also personally led the attack on Ras Mdaauar, which was carried out on the right wing of Div. Brescia, utilising two companies of Kradschützen-Batl. 15, reinforced by infantry guns, and self-propelled AT guns, and elements of Div. Ariete  and one battalion Trento. The attack was supported by the Corps Artillery battalion Frongia, and artillery of Div. Ariete. The attack advanced up to a short distance before the wire blocking the enemy position. General Rommel ordered that the line reached by evening was to be held as base line for the continuation of the attack on 18 April.[2] 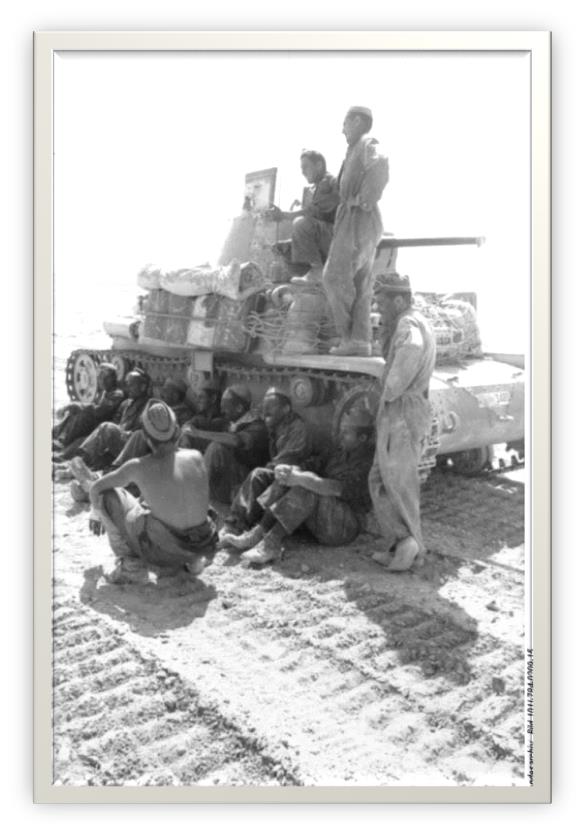 Vigorous activity of enemy combat planes against our siege troops, continuing all day.

During the afternoon Fliegerfuehrer Afrika attacked battery positions west of Tobruk, fuel depots, and a fort south of Tobruk with 41 Ju 87. Heavy smoke developed over the battery positions, forceful light and dark fires could be seen from the Gulf of Bomba.

[1]It is possible that this refers to an attempt on 16 April which was repulsed without much further ado by the garrison.

[2]This is again well documented in the Australian Official History at this link. (p. 167 onwards). It appears that this was another un-coordinated rashly arranged attack with insufficient forces.