Arrival and Departure of Subordinated Troops:

During an assault patrol of Div. Trento they lost almost completely:
– One company of 1st Battalion Infantry Regiment 61

The fighting reconnaissance ordered by the Corps was carried out by the divisions according to the intent reported during the night (see the same). It hit strong enemy cover after the wire barrier in all places. 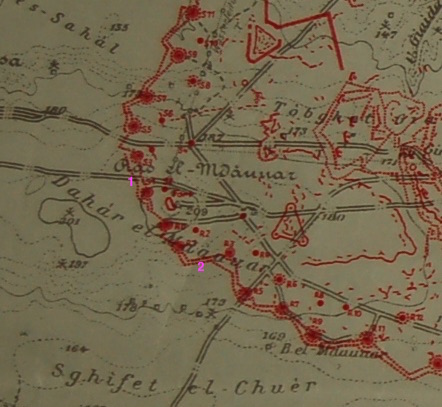 Map Detail of the Tobruk Perimeter. Pink numbers indicate site of actions in this WD entry.

The reconnaissance patrol of Division Trento reached until shortly before the wire barrier at 187. There a sudden fire attack with M.G. from the English position. 130 Italians raised their hands and surrendered or were wounded. 50 men of the company returned.[1][2]

One of the assault patrols of 15. Panzer Division led by Major Hecht, CO of I./Flak 18, upon reporting that it had reached Point 173, 2km south-east of Point 209, received the order to return. This order crossed with a further report by Gruppe Hecht, that it had reached Point 180 in the rear of Ras Mdauuar. All measures were now taken to exploit this success and to push all available forces into this with support from the Luftwaffe.[3] General Rommel, who immediately came to Aroma, noted however that 1) Major Hecht had carried out his order to disengage from the enemy, and 2) that the advance has not gone to 180, but reached right up to the wire barrier immediately south of 209, where it received heavy fire from 209 and frontally. [4] Here again the English showed his tried and tested tactic of letting the enemy come extremely close, and then to open concentrated fire in an ambush.[5] 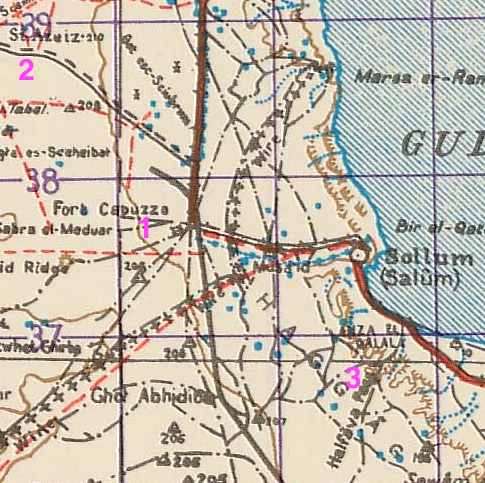 During the late morning hours the enemy broke off the tank advance against the northern wing of Gruppe Herff and moved back south under the impression of the air attack and the ground attack of the Assault Group Herff. Our attack on Point 206[9] and west of it could not push through during the afternoon due to enemy artillery fire.

In various radio messages to the O.K.H. the D.A.K. reported its concerned assessment of the current situation:

“Situation in front of Bardia, Tobruk, becomes more difficult day by day because of arrival of additional English forces……… The loss or encirclement of Bardia – Sollum would lead, because of a lack of forces for defending in two directions, also to the abandonment of the fight for Tobruk. A change of the severely crisis-like situation is only possible by accelerated arrival of German troops by air, including the completion of 5.lei.Div. and by immediate reinforcement of the Luftwaffe, especially ground attack planes, as well as by tasking submarines on the coastal strip Sollum – Tobruk……”

“Italian troops cannot be relied upon.”

O.K.H. answered to this: “Adding forces by air transport is currently not possible, since transport space has not been allocated for Army by O.K.W. Afrikakorps can until beginning of May only count on forces arriving by sea as planned, from early May improvement of arrival by sea and limited air transport possible………..”

[1] Position ‘1’ on the map is the approximate location of this engagement.

[2] The AWM describes the action thus:

The thrust on the left, which came in over the northern shoulder of Ras el Medauuar, was made across more exposed ground . There, during the night, “C” Company of the 2/48th had moved up from the reserve position to relieve “B” Company on the perimeter. Under cover of darkness and a dawn artillery bombardment about a battalion of enemy infantry appeared before the wire opposite Posts S1 and S3, which were occupied by a platoon under Lieutenant Kimber. About a company established itself in the perimeter wire between the two posts [these were about 600 yards apart]. Kimber’s posts were brought under fire but returned it with all weapons while from behind the artillery joined in the deadly work. A fire fight on such terms was all the defenders could have wished for. After about 20 minutes there was a fluttering of white flags, which appeared to have become standard battle equipment of the Italian infantry at Tobruk. Kimber, who had had previous experience of mustering on the battlefield, lost no time in sending out one of his sections. They brought in 107 prisoners, including two officers and several Germans; in addition the Italians left some 40 dead on the battlefield.

I believe it is important to observe that the narrative of both the Germans and the Australians is highly unfair to the Italians in this case. First the Germans are reporting that the Italians immediately gave up, when in reality they fought it out for 20 minutes, quite a long time under the circumstances. Secondly, it is hardly surprising that a unit loses the ability to fight when suffers almost 1/3 of its members killed in 20 minutes, plus an unknown number of wounded. The Italian surrender, caught as they were between two fortified posts, in an area with little cover, and after having suffered substantial casualties, is hard to criticize.

[3] The plan was for Gruppe Hecht to take an all-round defense position for a time and then to attack Point 209 from the rear, while Div. Trento carried out an attack from the west.

[4] Position 2 on the map shows the approximate location of where Gruppe Hecht reached. In the view of war diary No. 1 of 15. Panzer Division, Hecht was probably confused because of the sharp north-easterly turn the wire barrier takes in this sector.

[5] Based on the time stamps in the war diary No.1 of 15. Panzer Division, it is likely that this was the following action, as described in the AWM official history:

As though to show their Italian allies how it should be done, some 30 or 40 Germans made a further thrust about midday to the south of Ras el Medauuar between Posts R3 and R5, this time against Major Loughrey’s company. Fire from the posts forced them to ground about 300 yards from the wire . A patrol was sent out and in a brief running fight as the enemy withdrew several Germans were killed, and seven, including an officer, were captured.

It is interesting to note that the D.A.K. war diary is silent on the German losses suffered. The war diary No. 1 of 15. Panzer Division confirms that Gruppe Hecht suffered losses.

[6] Number 1 on the map. This was an old Italian border fortress that was coming to play an important role in future battles. It was eventually leveled completely.

[7] Number 2 on the map. During CRUSADER this was the scene of the battle in which 5 NZ Brigade was overrun.

[8] Number 3 on the map. It appears at this stage the German command had not yet appreciated the critical nature of Halfaya Pass, and was not overly concerned about not controlling it.