I have previously posted the some AARs on the pivotal battle of the campaign, the destruction of the Allied forces on the Sidi Rezegh landing ground on Sunday of the Dead, 23 November 1941. The report by Ariete Division’s di Nisio column can be found at this link, and that of 6 NZ Brigade at this link.

The report below is from one of the less glamorous German units, an anti-aircraft battery that was subordinated during this battle to 15. Panzerdivision’s armoured regiment, Panzerregiment 8. It provided the link between the advancing Panzerregiment on the right (east) and Ariete’s column on the left, during the final attack on Sidi Rezegh.

The battery was equipped with four 8.8cm dual-purpose guns and supported by 2cm light AA guns. More information from a period document can be found at this link.

From 19 November, at the time the code word “Hochwasser” (High Water) was transmitted, 3./Flakregiment 33 was subordinated to Panzerregiment 8 for mobile use. After moving into the concentration area and following that into the alarm area, the following combat actions took place from 20 November:

3.) Operation and combat activity: During the afternoon of this day strong enemy forces were attacked in the same area[3]. The battery was tasked on the left wing of the armoured battalion, and on its own left was connecting to the Italian division Ariete[4] which also attacked. Because of the fast advance of our tanks, as well as dispersedly positioned enemy infantry the battery could, due to the intense MG and rifle fire, not keep up the connection to our tanks. On the other hand the advance of Ariete proceeded only slowly, so that the gap between the two armoured units continued to increase. The enemy recognized this situation and attempted to enter into the gap with a group of tanks supported by infantry, to disturb the attack from the flank. The battery therefore drew all the enemy fire in this space onto itself. Despite strongest opposition it held its position to the beginning of dusk, and thereby prevented the realization of the enemy’s intentions.

Enemy infantry was engaged with airbursts and fire from 2cm guns. 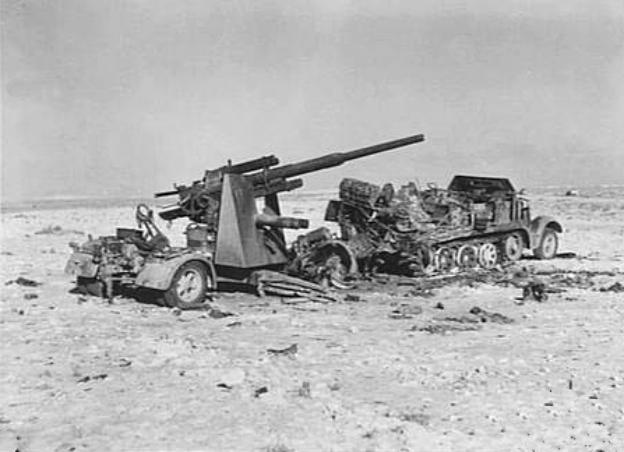