Arrival and Departure of subordinated troops:

Arrived by air in Benina:

On Tobruk front lively patrol activity by both sides.

Luftwaffe attacked 2 ships at 11.30 hours in Tobruk harbour of 1-2,000 tons. Hit close to ships side. [1] Direct hits were obtained in heavy AA battery on promontory. To commence the planned attack on Tobruk Stukas attacked battery positions and fortifications with great success during the afternoon. Fighters attacked ground targets in strafing attacks. Burning trucks and explosions in ammunition stores were also observed by siege troops 1 Blenheim and 1 Hurricane were shot down.[2]

2200 hours the area of Division Trento was under heaviest fire by naval artillery of heavy calibre.

1250 hours following order issued to Gruppe Herff:
“Occupation of track climbing up at Pt. 191 and Suleiman important. Protection has to be so strong in MGs, ATGs and single guns that it hold as long against enemy attacks until support from the rear arrives.” Operations order followed by courier officer on 29 April (see the same).

2200 hours reported Gruppe Herff: “South of line Sidi Omar – Sidi Suleiman 5km southeast Pt. 191 enemy secures with armoured cars and tanks, evade when we advance. Coastal plain up to 15km southeast of Sollum free of enemy.
Security pushed forward up to 6km southeast Sollum across the track leading from the desert to plain.” 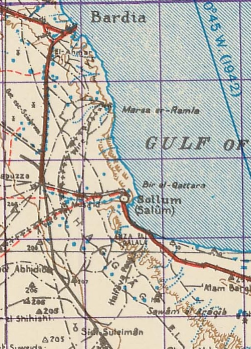 Replenishment of 5.lei.Div. by bringing in troops via air was announced by O.K.H.

[1]This was a joint German-Italian attack. The close hit was caught on film, and ABV Chakla (3,081t) was sunk as a result of the attack. Her sister ABV Chakdina was sunk on 5 December with heavy loss of life, when leaving Tobruk with POW on board, and the last of the three, ABV Chantala, ran on a mine outside Tobruk on 7 December 1941 and was lost.
[2]ID to follow.