There is a lot of talk about how the desert required higher fuel allocations than foreseen for the German forces, but very little evidence of how this worked out in detail. I have just now come across some information in my files, which I will post below.

Fuel was by far the most urgent and heaviest (by weight) of items in the German supply requirements. In the context of the desert war, fuel was crucial – no fuel, no movement of anything. The armies in the desert were dependent on trucks for moving supplies, and no attempt to ameliorate the situation by using coastal shipping, railways, or pipelines (all of which were used), could do more than lessen the requirement.

Fuel was needed to carry everything, including fuel. The further away from supply entry points an army got, the worse the ratio of useful load/fuel use got. In the German case, the Panzergruppe  Command estimated that 1kg delivered to the port of Bardia was equivalent to 6kg delivered to Tripoli harbour, which should be read that to deliver 1kg of goods from Tripoli to Bardia, 5kg of fuel were needed – in other words it was hugely inefficient.

Furthermore, for any movement off the main coastal road (which was in quality comparable to European roads), fuel consumption went through the roof. Moving vehicles of any type in desert terrain was not easy on the fuel use.

Finally, German fuel logistics were based on the concept of Verbrauchssaetze (loosely: ‘consumption units’), which used a set unit of output to determine a supply requirement. For fuel, this was the amount of fuel needed to move the vehicle 100km of distance. For weapons, it was called Ausstattung, and was the ammunition quota needed to carry out about 3-4 days of combat. For those wanting to know more, you can have a look at this link.

Now, after this explanation, here is the short but informative request, translated from a captured document, and found in WO208/3173 in the UK National Archives in Kew:

The 3,100 liter allowed to the Rgt. for every ten days is insufficient. The Rgt. asks for a raise of the allotment according to  the following key:

Some items of note here. AR33 was stationary during the period in question. It’s supply point was Bardia, while it was stationed east/south of Bardia. The high number of fuel requirement for evacuation of the sick may reflect the high incidence of sickness in Panzergruppe during this period. 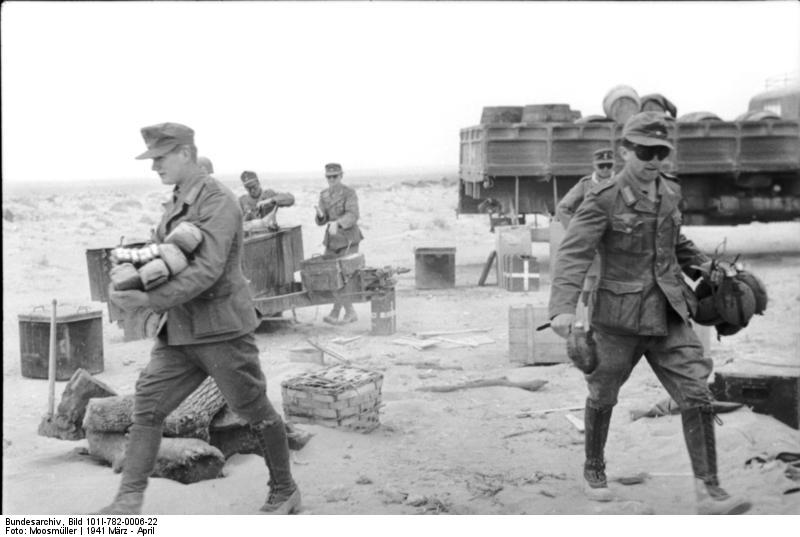 Delivery of supplies in North Africa, March/April 1941, courtesy of the Bundesarchiv via Wikimedia.