Thanks to Stuart over at Tanknet, I have come across this, and had a bit of a look. I want to note that I am publishing this for research purposes, and not to in any way, shape, or form endorse the content.

Cover page of the Italian edition of 30 June 1942, with Field Marshal Kesselring (OB Sued) and Italian Chief of the General Staff Field Marshal Cavallero in Benghazi.

It’s a pretty comprehensive collection of this Luftwaffe propaganda magazine, that was published in multiple languages, and also featured a lot of colour pictures.  Publication seems to have been bi-weekly, and it is reasonably close to the events, so for CRUSADER it is worth looking through the December to March issues of it.

The magazine carried foto stories of the war, both home and actual front, some political articles, regular columns such as ‘How they gained their Knights Cross’, some funny corners and a crossword, amongst other things.

When reading it we shouldn’t forget that it was a propaganda magazine for the Nazi regime, and anything, both pictures and text, needs to be critically considered in this regard, and with it constantly in mind.

Anti-aircraft artillery and camels on the move in the desert, in a rather nice shot that certainly led to some ribaldry in other service arms (in German ‘Kamel’ is a term used for someone who is or who has done something stupid). 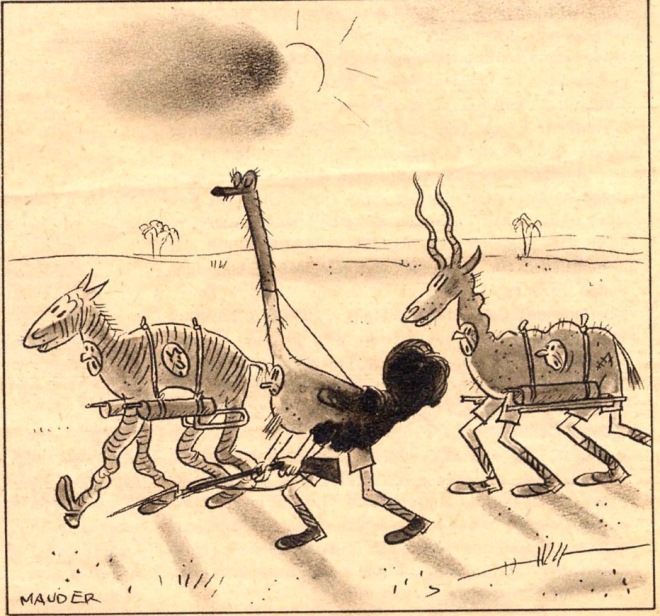 Caption: ‘What choice do we have, the German recce planes see every nosetip’. Part of a special set of caricatures on the war in Africa, in the 8 July 1941 issue, incidentally (or not) also the issue in which Major Heymer’s Knights Cross for his services with 2.H/14 was announced.

“What’s happening in Islam?” – Political education in the 8 July 1941 issue, probably to explain the strategic purpose of fighting in North Africa.

Death Notice of an ace – Lieutenant Erbo von Kageneck of III./JG27 was shot down in a dogfight with No. 250 Squadron R.A.F. south Agedabia. He suffered an abdominal wound and died five days later in hospital in Naples. His brother died in Russia the following day, where he served with the reconnaissance unit of 6th Infantry Division.