This article started off because of a note in the high-level traffic files of 8 Army on a request by 4 Armoured Brigade to scour the Delta for additional M3 Stuart tanks[1] and ammunition for their 37mm guns. The battle that gave rise to the phone conversation was fought over two days, with the initial contact between the forces occurring at or just after 1600 hours on 19 November, and combat broken off due to failing light about 2-2.5 hours later. Combat then recommenced the next morning, when both sides found that their night leaguers were just 3 miles away from each other. At the end of the two days, 4 Armoured Brigade had completely utilized the M3 Stuart tank reserve and also experienced very heavy ammunition expenditure. This prompted the phone conversation that gave rise to this article, appended at the end of this article. An officer in 5 R.T.R. claimed that on 20 November the tanks A Squadron 5 R.T.R. went through 250 rounds of 37mm ammunition each[2]. 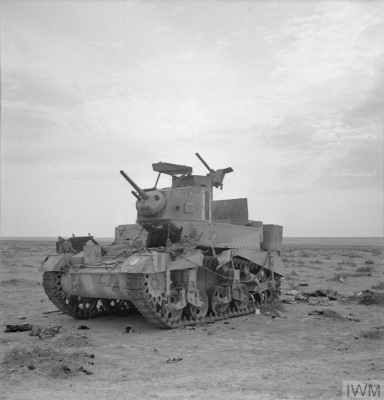 The note that started the research, from the situation reports of 8 Army, is below.

Eighth Army require as many M3 American tanks as possible on top priority. That is to say, this type of tank is required more urgently than other types, as the reserve held by Eighth Army is all gone.

Eighth Army require to be informed how many M3 American tanks can be sent as a result of this request and when they may be expected.

Further stocks of ammunition for the weapons mounted in M3 American tanks are urgently wanted. It was understood that this request referred to 37mm rather than .300”. Lt-Col Belchem said that a quantity of this ammunition was being held at Alexandria for onward despatch, and that if this reserve was already on its way forward well and good; if not he recommended that as large a quantity as possible should be flown up.

The above demands have already been referred to the D.D.S.D.

The following day, the rather scarce transport plane capacity of Middle East Command was put at 8 Army’s disposal to service this request, and the Bristol Bombays of No. 215 Squadron flew ten tons of M3 gun ammunition up to L.G. 122 for 4 Armoured Brigade, ‘at short notice’ as the RAF report noted. 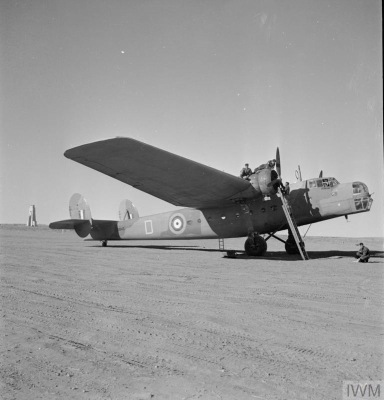 Bombay Mark I, L5845 ‘D’, of No. 216 Squadron RAF, undergoing engine maintenance at Marble Arch Landing Ground, Tripolitania, while engaged on the transportation and resupply of No. 239 Wing RAF, the first Allied fighter wing to operate from the landing ground after its capture on 17 December 1942. Courtesy IWM

Two days later, on 22 November another phone conversation, this time between Brigadier Galloway, the B.G.S.[3] of 8 Army, and Lt.Col. Jennings, discussed the matter of American tanks.

6. They require every American tank we can send up as well as every reinforcement capable of driving the American tank. (Note – Suggest we should examine whether the ammunition situation warrants our sending up many tanks. I understand that ammunition for American tanks is becoming exhausted.)

Following this, on 24 November, Lt.Col. Jennings noted for the war diary the following:

2. Forty American M3 tanks now en cas mobile are to be ordered forward immediately. DAFV[4] is to arrange 40 drivers from 4 Hussars for ferrying them ahead of R.H.[5]

I intend to publish an in-depth analysis of the first day of 4 Armoured Brigade’s two-day battle with Panzerregiment 5 on 19/20 November. This will be published as a separate article, and given its nature I am looking for e.g. a magazine to place it. The purpose of the expanded article is to analyse in detail the events surrounding the first clash of 4 Armoured Brigade with the enemy, in the process also correcting what I perceive as errors in the historical record that have affected the view we hold of it, and to offer a new perspective that raises questions about both the performance of British armoured units at regimental level, and that of the 21.Panzerdivision. If anyone has any ideas who might be interested in something of this kind, please let me know.

[1] Confusingly, the US forces used ‘M3’ to name the M3 Stuart light tank, the M3 Medium tank (both Grant and Lee versions), the M3 37mm gun, and the M3 75mm gun. Troops nicknamed the M3 Stuart the ‘Honey’ because of the smooth and untroubled ride it provided. The nickname is sometimes used in war diaries and reports.
[2]If the number is correct, this would equal more than two complete loads, and be almost equal to the whole supply per tank that was available in North Africa at the time, 260 rounds according to Niall Barr in ‘Yanks and Limeys’
[3]Brigadier General Staff – essentially the Chief of Staff. Brigadier Galloway of the Cameronians was a well-regarded staff officer, who rose to command 1 Armoured Division in 1943, although illness meant he never led it in battle.
[4]Director, Armoured Fighting Vehicles
[5]Railhead