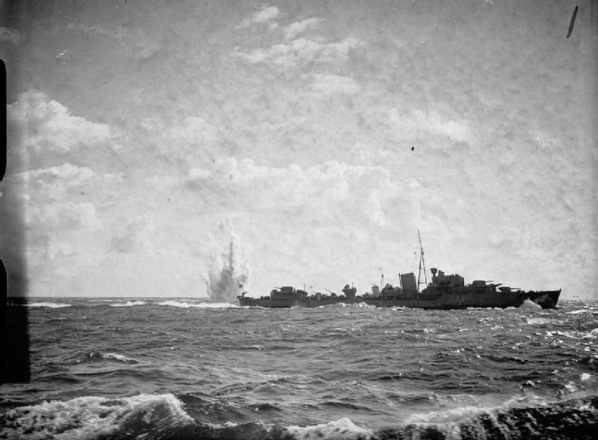 HMS Kandahar, a K-class destroyer, was one of two ships lost on the night of 18/19 December 1941, when Force K ran into the Italian ’T’ minefield north of Tripoli, trying to intercept the M.42 convoy from Naples, carrying urgently needed tanks and supplies to Axis forces in North Africa. Having come to the aid of the stricken HMS Neptune, a light cruiser that first hit a mine at 0106 hours on 19 December, HMS Kandahar herself was mined at 0318 hours that same morning. The mine blew off her bow, and she drifted, without power or steering, slowly in an East-South-Easterly direction.

The light cruiser HMS Penelope and the destroyer HMS Jaguar had stayed with the stricken ships. HMS Jaguar then sought out the drifting HMS Kandahar, but it took until the next morning before she found her. The idea was to either attempt to take her in tow or take off survivors. Either was a perilous business, just about 15 miles off the North African coast, and with daylight coming up, but she managed to do this undetected.

The superbly executed rescue work earned her captain, Lieutenant Commander  Lionel Rupert Knyvet Tyrwhitt D.S.C., the Distinguished Service Order, even though he disobeyed the order to return to Malta if he had not found HMS Kandahar by 0300. He found her at 0420 on 20 December 1941 and remained with her until 0620, when she was sunk by HMS Jaguar with a torpedo.

This officer was in command of H.M.S. Jaguar when she came to the assistance of H.M.S. Kandahar.

His instructions were that if he had not found Kandahar by 0300/20 he was to return to Malta. He had not found the ship by this time, but he was so certain that she was in the vicinity that he persevered and made contact at 0420. His ship handling when bringing Jaguar alongside in bad weather conditions was perfect. The weather, however, was too bad and Jaguar was ordered to lie off and pick survivors after Kandahar had abandoned ship, and to leave not later than 0530. Again Lieutenant Commander Tyrwhitt’s ship handling was excellent and expedited the recovery of survivors. Nevertheless this was not completed by 0530, and Jaguar remained till 0620 within 15 miles of the enemy coast until the job was completed.

Lieutenant Commander Tyrwhitt’s perseverance and determination was responsible for the recovery of so many survivors.

Lt.Cdr. Trywhitt died when HMS Jaguar was attacked by German submarine U-652 off Sidi Barrani on 26 March 1942. Two of four torpedoes struck her, setting her on fire and causing her to sink quickly, taking with her almost 200 men including her captain.

The two medals that stand out are the Albert Medals. Both were posthumous awards, and they are the highest award for gallantry displayed in saving lives at sea. Admiral Pridham-Wippell then ‘strongly recommended’ the award of the Albert Medal for both ratings.

More detail is provided in the letter from the Admiralty to the Home Office, which requested the award of the Albert Medal.

We recommend the Posthumous Award of the Albert Medal to Acting Yeoman of Signals George Patrick McDowell, D/JX.143268 and Leading Seaman Cyril Hambly, D/JX.133146 for gallantry in saving life at sea.

When H.M.S. Jaguar succeeded in finding H.M.S. Kandahar, which had struck a mine and was sinking, the weather too bad for her to be able to take off survivors by going alongside, and she was ordered to lie off and pick up survivors after Kandahar had abandoned ship. Nets were hung over her side to help men who had swam over, or come over on rafts, to climb on board.

They had swum over to Jaguar, but to climb the side of the ship plunging in the heavy seas was not easy, and though they could have climbed on board themselves, they stayed in the water helping others who could not, until they lost all strength and were drowned.

Both men were young, McDowell only 22, and Hambly 28. The request for an immediate award read as follows.

This rating lost his life helping other men to board H.M.S. Jaguar.

Having swum over to “Jaguar” instead of heaving himself inboard, McDowell/Hambly stayed in the water helping others up the net until he lost strength and was drowned.

I consider his conduct deserving of the highest award for gallantry and self sacrifice.

Unfortunately I do not know who the officer signing the recommendation was, he appears to have been the Commander in charge of HMS Nile. Maybe someone can help? 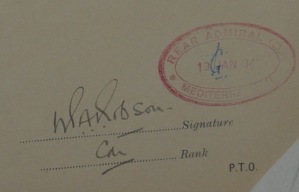 The award was recommended to the King on 11 May 1942 by Home Secretary Morrison, and so approved, as can be seen below.