Many people are aware of the ‘Every tank a Tiger, every gun an 88’ phenomenon, where faulty perceptions of participants are taken at face value. Source selection and verification is a major issue in historical research, and particularly difficult in WW2, where we sometimes suffer from an avalanche of sources. While many of these seem quite reliable, it is necessary to cross-check, even where primary sources are concerned, and most certainly so where secondary sources are involved.

No. 105 Squadron and the Mystery Schooner

So for this short vignette, I am using something rather closer to home, namely an air attack by Blenheim bombers of No. 105 Squadron R.A.F. on a schooner off Sicily on 9 September 1941. This attack is well remembered and described in Battle Axe Blenheims, the unit history of the squadron, where the target is described as a ’Squealer’, a radio-equipped early warning vessel that acts as spotter for the the defenses on Sicily.  Four ships had gone out that day, led by Squadron Leader Duncan, the others commanded by Sgts. Brandwood, Mortimer, and Weston. They were looking for a convoy off Cape Spartivento, but did not find it. Sgt. Smith, observer on the CO’s plane, recorded the attack in this personal log.

Search for convoy SE coast Sicily – not found, but saw a schooner off the coast – later confirmed my conviction. This was a Squealer, equipped with radio sending [equipment], sighting information to Italian Fighter Command. Their SOS was intercepted in Malta. 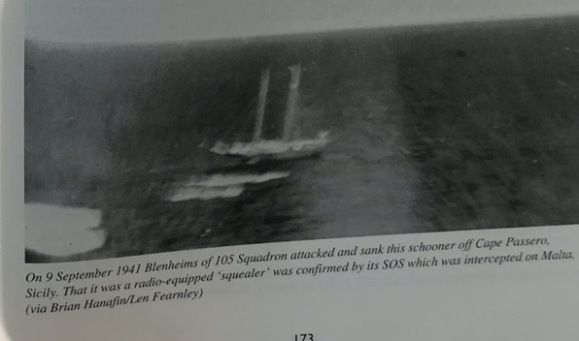 Picture of the attack from Battle Axe Blenheims, p. 173

Source Review Now for the first oddity. there is no mention of this attack at all in the Squadron Operations Record Book (ORB), which is rather strange, since one would presume that the sinking of such a vessel would be recorded.

At this stage, my inclination would be to file this under over-active imagination, date error, whatever. This is confirmed by a quick check in Navi Mercantili Perduti , the official loss listing of the Italian merchant navy[1], also shows no schooner lost that day. Nevertheless, there is a picture of the attack, and a rather detailed log entry.  Fortunately enough however, I have received the relevant days from the war diary of Supermarina, the High Command of the Italian Royal Navy. This diary contains a lengthy entry on a note from Naval Command Augusta in Sicily, of an attack on the Motoveliera[2] Anita L.[3] of the Vigilanza foranea[4] at Capo Murro di Porco. During the afternoon of 9 September was attacked and bombed by four enemy bombers. She was hit several times at the waterline and in the masts/rigging. Nobody was hurt and the vessel sought refuge in Siracuse harbour where repairs were ongoing.

So despite no mention in the ORB, it appears pretty certain that the memory of Sgt. Smith is quite correct, and an attack took place, and that this was an operational auxiliary navy vessel. It is wrong however in overestimating the effect of the attack, since the Anita L. was not sunk after all. To arrive at this conclusion, following interest being triggered by a secondary source, a review of two primary sources, one on each side (the ORB and the war diary of Supermarina) was necessary, together with a check in the Official History of the Italian navy. Interestingly in this case, if one had just reviewed the British sources, the attack would likely have been dismissed as an imaginary event or at the very least wrong in date. Only the combination of sources from both sides makes it possible to come to the right conclusion, and confirm and correct as necessary the record in Battle-Axe Blenheims.

Thanks go to Lorenzo Colombo of the Con la pelle appesa a un chiodo blog, and Italian naval historian Enrico Cernuschi, for their help.

[1]This is part of the Italian Navy’s Official History set of WW2. Lorenzo Colombo checked it for me.

[2]Sailing vessel with an auxiliary engine.

[3]M/V Anita L of 95 grt was requisitioned as V213 from 19/02/1941 until 02/04/1942, enrolled in Lussinpiccolo (today Mali Losinj in Croatia), and it appears she survived the war. She had registration number 68. Many thanks go to Marco Ghiglino who provided this information.

[4]Part of the Regia Marina, a service utilising requisitioned vessels to stand guard and alert defenses to incoming seaborne and aerial attacks.

Bristol Blenheim Mark IV, V6014 ‘GB-J’, of No. 105 Squadron RAF Detachment in a dispersal at Luqa, Malta. Canvas covers protect the cockpit and glazed nose section from the sun. From July to September 1941, 105 Squadron was detached from the United Kingdom to Malta, to operate against targets in the Mediterranean and North Africa, losing 14 aircraft during the period. Note the modified gun mounting under the nose. IWM CM1357