In the records of Marine Bordflak Kompanie Süd, the Kriegsmarine unit supplying German merchants with anti-aircraft capability, there are quite a few records of engagements between the anti-air gunners and attacking planes. Claims were meticulously recorded and verification by witnesses sought.

One such claim was made in a report on 6 November 1941, by the gun commander of an anti-aircraft gun on the German merchant SS Brook, one of the smaller vessels plying primarily the coastal route from Tripoli to Benghazi. SS Brook was in port at Benghazi at the time, and joined the air defense of the port during an air attack late evening of 31 October. The claim made was for a Blenheim or similar, engaged at 2225 hours. 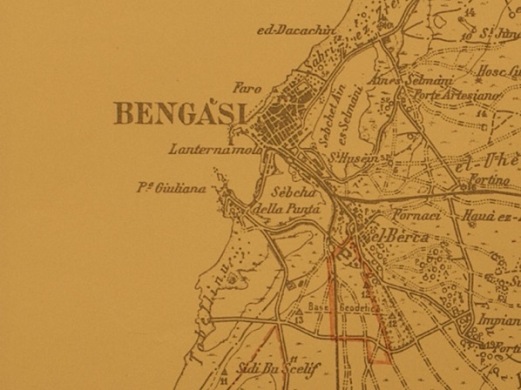 The issue with the claim is that I cannot find a corresponding loss. The Egypt Wellingtons were  not tasked to operate over Benghazi that night, attacking Berka landing ground and store depot instead. As the map above shows however, these are close enough to the port that a plane could have been free-lancing or chosen to cross out to sea via the port.

Nevertheless, the Wellingtons, as far as I can see also do not report a loss or indeed having sustained AA damage, and reported AA as moderate and search lights as ineffective. The standard work on RAF bomber losses in the Mediterranean, by Gunby and Temple, also does not record a loss due to enemy action that night. There is also no record that Malta-based Wellingtons or Blenheims attacked Benghazi that night, or that the Beaufighters of No. 272 Squadron R.A.F. did so. South African Marylands did not operate at night, and also report no loss.

So the issue is not just whether a plane was actually lost, but also who operated over the port that night?

The claims report is below.

on shooting down of an enemy plane by the embarked AA of SS Brook, 31 October 1941 around 2225 hours in Benghazi Port.

At 2225 hours a plane attempted to attack the harbour and was caught by the search light. The plane, which flew towards us, was at a distance of about 16 h/m[1]. At 13 h/m we opened fire and scored 10-12 clear hits until the switchover point (11 h/m)[2]. Hits were scored in the main fuselage and close to the engine on the wing. During impact on the wing it was noted that pieces of the plan (pieces of about the size of a hand) flew out of the wing, at the same time as sparks rained down. After this the plane wobbled heavily. The plane now went lower, escaped the search light beam, and could no longer be observed by us.

We were the first to engage the plane, and the later shots from other guns, which stood about 800m further from the target, were far off it. Furthermore, the plane, which was recognized by us as a Bristol Blenheim, immediately escaped the search light.

Following an inquiry with the Naval Transport Office Benghazi, we were informed that most probably two planes were shot down. I am convinced that the plane engaged by us must be one of them.

The remains of the crashed plane had not been found by the time of our departure from Benghazi, but the search was continuing.

The Armed Forces Communique reported the shooting down of four planes the next day.

[2] The point where the plane flies away from the location of the gun, and is no longer to be engaged. 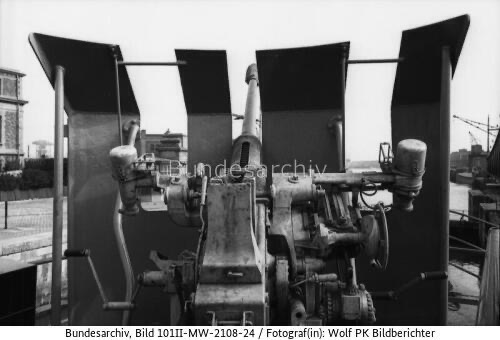