While checking some things on Twitter, I came across this very interesting account, by @davidkleinKS, which posts historical newspaper clippings and caricatures. I have always had a soft spot for political caricature, as I grew up in a newspaper family.

None of these relate to Operation CRUSADER, but they are of interest and relevance to the contemporary political perception of the desert war nevertheless.

As Rommel swept the defeated Eighth Army before his Axis army and advanced into Egypt, dark clouds of worry over the pyramids and the Sphinx, which inscrutably looks on as Nazi banners advance towards it.

Hitler and Mussolini watching storms brew over their position in North Africa.

The position is turned and the hunter has become the hunted. A victorious Eighth Army chases Axis forces out of Egypt.

In what must be the worst portrait of Rommel ever done, his dream of the Suez canal and domination of the Middle East is turning into a mirage.

Eden’s statement on the turning point that was marked by El Alamein, and a rampant British lion pounces. 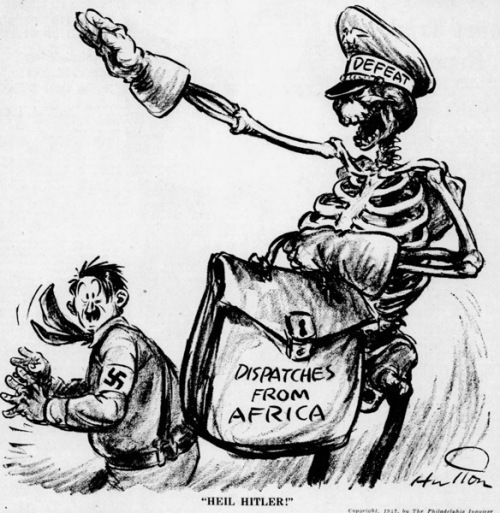 The impact of this on the German war was quickly played up in the news.

You can see that the caricaturist here needed to reach deep into the chest of alliterations. The term used for Egypt is offensive, and no longer in use much, fortunately enough (I had to look it up). It is presented here in the context of a historical document. The term derives from another offensive term for Romani people, and means ‘fraud’ or ‘swindle’. I presume it relates to the Italo-German relationship and how that was perceived in the Allied countries.

Putting the defeats into a wider context, and foreseeing the next choke points in the German war quite well.