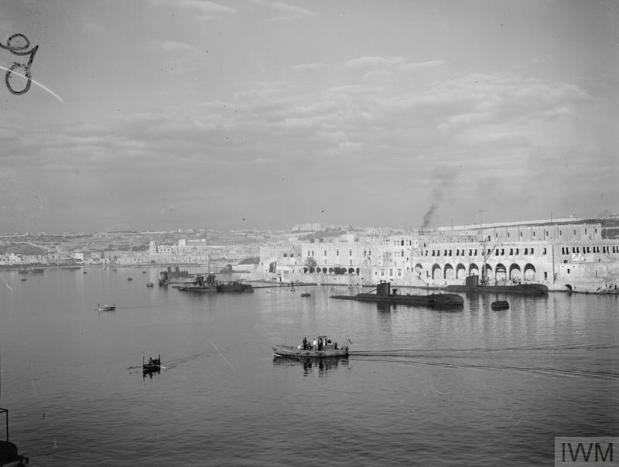 It doesn’t often happen that I come across a text in my files that makes me roll my eyes. But this is clearly one of them, as it shows some breath-taking, and probably subconscious arrogance by the Germans towards their Italian allies. I can only imagine the Italian ASW specialists fuming when reading the entry section. It was helpfully translated into Italian. The translation below is mine, and the German original is from the NARA files of the Chief of the Naval Liaison Staff at the Italian Navy High Command, the ranking German navy officer in the Mediterranean.

As outlined in older posts (here, here, and here), the German Kriegsmarine  and the Italian Royal Navy, the Regia Marina, had a close technological co-operation when it came to matters of mutual interest, such as preventing Royal Navy submarines from wreaking havoc on the supply lines to North Africa. 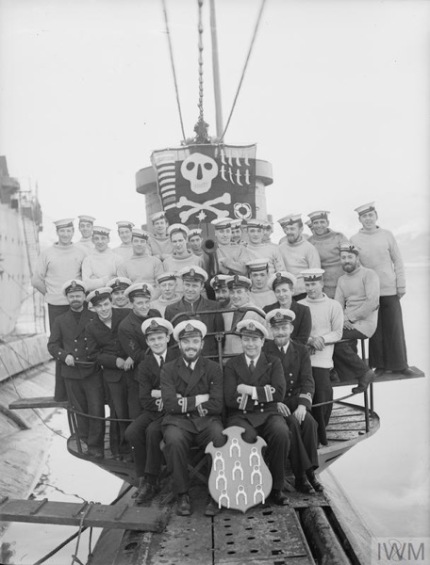 The Commanding Officer, Lieut Cdr R D Cayley, DSO, RN, (centre) with his officers and men on board the UTMOST beneath their Jolly Roger success flag. (Courtesy IWM Photo Collection)

The document in question is a memorandum about the current state of anti-submarine warfare on the Axis and the Royal Navy side, with a reasonably amount of detail. It is part of an exchange of information that ultimately led to the installation of German active sonar (S-Geraet) and depth charge launchers on Italian vessels, to help protect supply convoys in the Adriatic, Aegean, and Central Mediterranean. Royal Navy submarines had become a clear part of the menace to the supply lines, together with airborne interdiction, primarily from Malta, and the occasional surface action, although by early September the last one was almost five months ago, when Force K intercepted and destroyed the Tarigo convoy off Kerkennah buoy in a night action on 16 April 1941 (see here for background).

To protect against air attack, the AA defense of the merchants was thickened with naval AA guns from the German Marinebordflakkompanie Sued, as outlined in this older post. It wasn’t perfect, but between this, and the AA defense by the escort units, attacking convoys became a more risky endeavor, with high loss rates for the Malta-based Blenheim day bombers, as outlined here. Other co-operation measures included the transfer of Kriegsmarine DeTe shipborne radar to be installed on Italian major units, the transfer of Italian aerial torpedoes in exchange for German 2-cm AA guns and ammunition from the Italian air force to the Luftwaffe.

By September, that left the submarine threat. It was clear that Italian technology was behind German in this regard, and because the Malta-based submarines threatened German and Italian supplies indiscriminately, something had to be done. So the Germans proceeded to explain the nature of the submarine to their allies, as below. The memo is quite long, and mostly very sensible. It covers location devices including passive and active sonar, radar, radio detection, and buoyed nets, as well as anti-submarine weapons such as depth charges (ship- and air-launched), submarine nets. It interestingly also covers some experimental or research-stage Kriegsmarine detection measures, such as a fotografic device to locate a submarine that is stationary on the bottom of the sea, an electromagnetic device that showed when a sub-hunter was in a circle of 70m on top of a sub, a magnet that would attach itself to a sub and transmit sounds from it to the sub-hunter, and mentions the Flettner helicopter, which was expected to come into ASW service in the next two years. 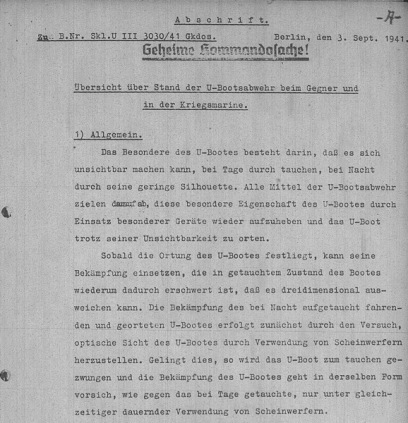