Around the turn of the year 1941/42, Castelveltrano airfield in Sicily (I have also seen Castel Vetrano and Castelveltrano as spelling) was stuffed with Axis transport planes which had been gathered in the Med, either to resupply Africa, or to transport in units and supplies belonging to the Luftwaffe’s 2nd Air Fleet which had just started its camapign against Malta. Previous supply to North Africa from Athens and Crete had ceased when the Axis forces retreated past Benghazi, due to the increased distance involved.

The Royal Air Force aerial reconnaissance picture below shows the airfield and the Axis planes parked on it on the day before the successful attack, and it was probably the reason for the attack.

The picture was almost certainly taken on 3 January, on a reconnaissance by No. 69 Squadron RAF out of Luqa air field on Malta, by pilot F/Off Warburton (who was later to command No. 69 Squadron) and LAG Shirley in Beaufighter T.4705, which lasted from 1300 to 1500 hours, and noted 75 bombers and 13 fighters on Castel Vetrano. It also covered Trapani, Bopizzo, Marsala seaplane base, Palermo port, Trapani port, and attempted Comiso where no pictures could be taken due to cloud. Based on the results of the reconnaissance it was clear that Castel Vetrano was a very tempting target. 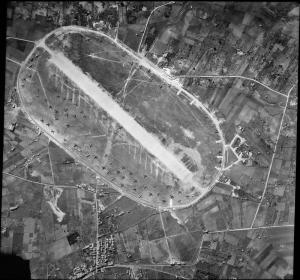 Vertical aerial reconnaissance view of Castelvetrano airfield, Sicily, the day before a successful attack was made on it by Malta-based Bristol Blenheims of Nos. 18 and 107 Squadrons RAF. A number of Junkers Ju 52 and Savoia Marchetti SM 82 transport aircraft, many of which were destroyed during the raid, can be seen parked around the airfield perimeter. © IWM (C 4183)

Wing Commander Adrian
Warburton (centre), Commanding Officer of No. 69 Squadron RAF, standing with some of his aircrew at Luqa, Malta. (IWM CM4672)

At the time, strike forces on Malta were still active, and two operations were launched. A day attack on 4 January by Nos. 18 and 107 Squadrons with their Blenheims, and then on the night 4/5 January 1942 the RAF bombers (Blenheims and Wellingtons) from Malta paid a repeat visit to Castelvetrano airfield.

The official report by the RAF for 4 January mentions both attacks.

12. MALTA: Bomber operations. The following report has been received of the attack on 4 January by 10 Blenheims on CASTELVETRANO aerodrome. Bombs were dropped from 25-100 feet on 75 transport aircraft which were closely parked on the aerodrome. At least 30 of them were destroyed by fire and many others seriously damaged. Troops on the aerodrome were also machine gunned and many casualties caused.

13. On the night 4th/5th January 9 Wellingtons renewed the attack on CASTELVETRANO aerodrome. Over 13 tons of bombs were dropped (including 1 4,000lb.) during a period of nearly 9 hours. Fires were started all over the aerodrome and 14 aircraft were seen to be burning. A petrol dump exploded starting an extensive fire on the edge of the aerodrome.  A.A. positions were machine gunned. One Wellington (and crew) is missing.

The ORB entry from No. 107 Squadron also provides a lot of detail.

A very successful raid was carried out amongst the large number of aircraft. Many of the JU.52’s and Br 20’s on the ground were either blown up or set on fire by bomb and m/gun fire. A very considerable proportion of the remaining aircraft were probably rendered unserviceable. Bombs fell in all part of the aerodrome and terrific blast effect was observed. One portion of the southern end of the runway was blown up. Two columns of black smoke could be seen from 40 miles, rising to almost 1,000’. Troops in blue uniform were also m/gunned in the South West corner of the aerodrome. The raid was carried out by three formations in quick succession from between 25-100’. 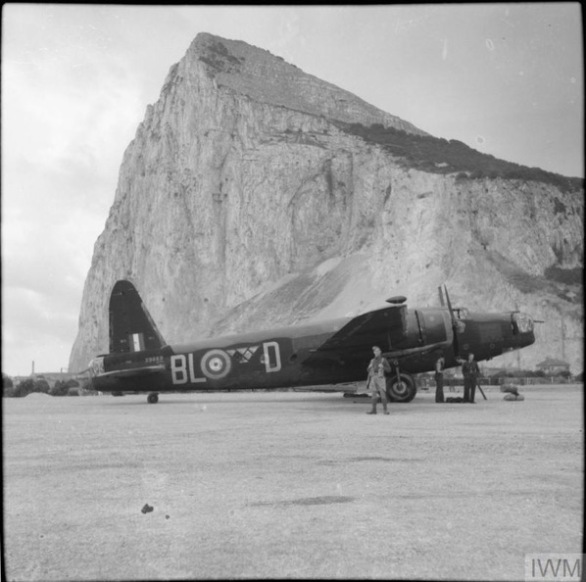 Vickers Wellington Mark IC, X9889 ‘BL-D’ of No. 40 Squadron RAF, under guard at Gibraltar while en route to the unit’s new base at Luqa, Malta. X9889 was one of three of the squadron’s Wellingtons destroyed during a German air raid on Luqa on 29 December 1941. (IWM GM263)

The after action report (AAR) of the Wellington attack makes interesting reading.  Nine Wellington sorties were flown that night, with three a/c making the trip twice.  One of the Wellingtons carried a 4,000 lb (1,800kg) “blockbuster” bomb, and appears to have managed to drop it right into the parked planes. The attack went in in two waves, first four aircraft  between 2041 and 2200, including a single aircraft with the blockbuster bomb. A second wave from 0357 to 0525.

An extensive report has survived in The National Archives at Kew. There are a number of errors and typos in there, which I reproduce here.

SUMMARY No fires were visible from the day attack. The first wave consisting of four Wellingtons attacked between 2041-2200 hours and started fires amongst aircraft on the Eastern side of aerodrome which developed. A Petrol dump was also hit causing explosions visible 40 miles away. This was on the Eastern side of aerodrome. Enemy aircraft could be seen burning and were identified as JU 52’s. Explosions and fires were also seen from the North East and South West corners of the aerodrome. One Wellington then attacked with a 4000 lb bomb which landed about tow thirds from North-South along the runway falling just East of it. When the second wave arrived at 0357 hours the fires had gone out, but the first aircraft of the second wave dropped sticks East of the runway and started 6 red fires which followed large explosions and also started a white fire in buildings on the road east of the runway. The next aircraft straddled the runway and saw fires which had increased to 8, spreading amongst enemy aircraft. The last aircraft started another fire North of aerodrome and caused 6 explosions followed by fires which were visible 20 miles away. Aircraft (S) failed to return.

From the individual plane narratives:

(P) was first over the target and made runs from East to West and North East to South West and dropped 3 sticks from 7500 feet and 7000 feet. The first stick fell across the North East corner of the aerodrome and started fires which burned well. The second stick fell across the East of the aerodrome with no results observed apart from the Bomb flashes.

saw the fires developing especially the Northern most, this leaked as though Petrol was burning as explosions were visible 40 miles away appeared from time to time, aircraft made runs from South to North and West to East and dropped 4 sticks from 6-7000 feet. The first stick fell in the South West corner causing explosions, the second fell in the Centre of the aerodrome (just missing the runway second and third fell in the North East corner near the fire. The fourth straddled the aerodrome from West to East crossing the centre and starting a red fire.

(M) Dropped three sticks from 3-2000 feet running in from West to South East. Two sticks fell in the North East corner and a third in the South East corner. No results seen. He saw that most aircraft had been parked near the runway directly on the east of the aerodrome and that they looked like JU 52’s. He saw one JU 52 well on fire. He also machine gunned 2 light A.A. positions which opened up from a bend in the road just West of MENFI near the coast.

(S) dropped the sticks from 7000 feet. The first of which fell parallel to the runway in the centre of the aerodrome from East to West. No results seen.

(Z) dropped his 4,000lb [Blockbuster] bomb from 8000 feet which landed just east of runway about two thirds of the way down from North-South.  A terrific explosion resulted throwing up debris and dust.  The target was visible when aircraft crossed the coast and showed up well.

(P) No fires were burning when the aircraft arrived on the target at 0357 hours (Approximately 4 1/2 hours later than aircraft Z) but after five sticks dropped from South to North and East to West from 8500 feet 6 red fires East of runway were started preceded by 6 red explosions. A large white fire was started in one building on the road East of the aerodrome perimeter.

dropped 5 sticks from between 6500 and 8000 feet which fell north of the aerodrome starting a red fire west of the aerodrome and across the centre of runway from North West to South East. Saw the fires spreading amongst aircraft on the ground and counted at least 8 fires on leaving.

(M) dropped 4 sticks from 7000 feet. The first consisting of 4x 500 lbs fell on the runway and one 500 lb fell in the red fire East of runway the second fell along the East perimeter of the aerodrome the third started a fire North of the aerodrome and the fourth fell South of the aerodrome causing 6 explosions. Followed by fires visible 20 miles away.

OPPOSITION Consisted of light tracker which was fired at flares and medium and heavy FLAK coming from positions N.E. and S.W. of aerodrome.

On 8 January F/Off Warburton went back to Sicily for a reconnaissance in the same Beaufighter, this time with AG1 Hadden, from 1045-1300. On what the ORB mistakenly labels ‘Castel Benito’ (that’s the main airfield at Tripolis), but which I think should be Castel Vetrano, he takes pictures from 5,000 feet, noting 29 bombers and 26 fighters, as well as 11 burnt out bombers and 1 fighter being visible.

The S.82 were the biggest transport planes available in the Med at this stage, and losing 28 of them even if some were only out of service temporarily must have been a very big drain on overall Axis air transport capacity at a critical juncture.