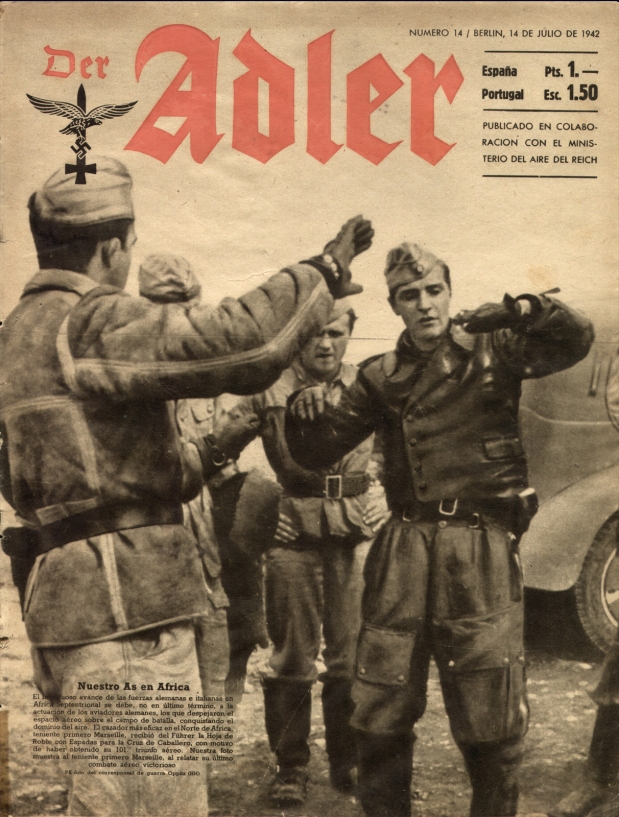 As noted, every so often I post something not related to CRUSADER. The document below is a report by the unit that recovered the body of Captain (Hauptmann) and Squadron Commanding Officer (Staffelkapitaen) Hans-Joachim Marseille, at the time the top scoring German ace in North Africa, when his Me 109 went down in flames on 30 September 1942 in the area of Pz.Gren.Regt.115 of 15. Panzerdivision. 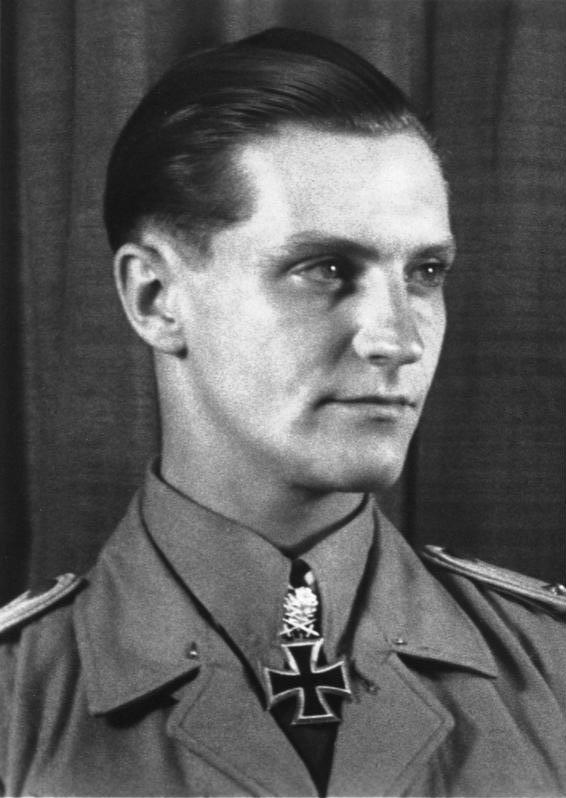 Marseille was a major part of German propaganda about the war in Africa, and the way the immediate actions after his death and recovery went demonstrate this. He was generally regarded as an exceptional fighter pilot, and had been awarded well over 100 victories at the time of his death. 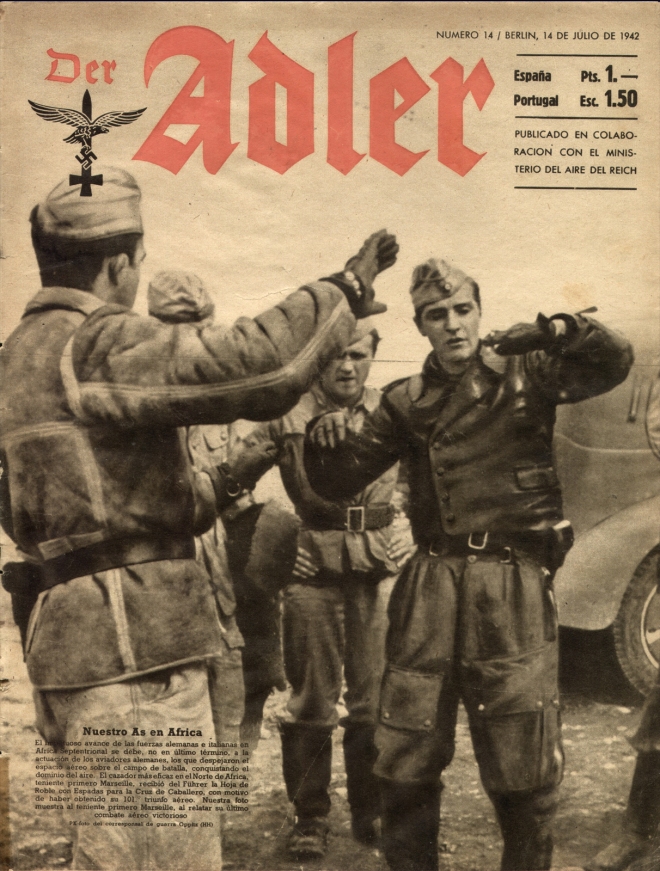 Spanish edition of the Luftwaffe propaganda magazine Der Adler (The Eagle), 14 July 1942, Marseille on the cover, explaining a dog fight.

M o r i t z, Lieutenant in the Staff of

Report on the Crash of Lieutenant[1] Marseille

On 30 September 1942, at 11.42 hours, 6 German Messerschmitt fighters, coming from the east, fly towards the location of the staff units of Pz.Gren.Rgt.115. Directly above the position of the heavy infantry gun company[2], in about 200 m of altitude, one of the planes suddenly started trailing black smoke; while the pilot escaped, and then, since the parachute did not open, fell from 200 m of altitude smashing into the ground, the plane spun almost vertically down and exploded on the ground.  Remaining parts burned.

Immediately attending soldiers of the heavy infantry gun company, as well as the doctor arriving five minutes later, could only note the death of the pilot because his brain was smashed in (in addition to a complex fracture of the femur). The time of the crash was 11.45 hours. Further investigations showed that the pilot was Lieutenant Marseille. He carried the following private items on his person: 2 rings, 1 medal, 1 letter, 1 watch, Knghts Cross with Oak Leaves and Swords[3]. These things and the whole pilot’s dress, including parachute, were picked up shortly before 12.00 hours by Sergeant W. Wal, L-21658 Munich II (7.schw.Flum.Kp.Ln.Abt.Afrika).

I arrived at 12.00 hours myself, and immediately recognised Lieutenant Marseille based on the published pictures. I ordered immediately, following the doctor’s cleaning and wound-dressing of the body, to lay it in state. Lieutenant Marseille was laid up under a large awning, covered by a Swastika flag, and surrounded by a honour guard of six men with rifles. At the same time, the commanding officer of the 1st battalion, 10cm Artillery Group Littorio, stationed nearby, Captain Luisiana, arrived with 3 officers and put two wreath fabric pieces in the national colours of Italy onto the chest of the dead Lieutenant Marseille, under the ceremonial greeting of all those present.

At 13.15 hours, Lieutenant Marseille was collected in ceremony by all the officers of his squadron, led by his squadron commander[4], and transferred to his base.

Marseille with his 48th claim, a Hurricane Mk. II of No. 213 Squadron R.A.F., in February 1942. Courtesy Bundesarchiv Bildarchiv.

Thanks to RodM on the 12 O’Clock High Forum, I can now add two ULTRA intercepts conveying the news of Marseille’s death to authorities in London. This is again a highly unusual step, showing that Marseille was not just recognised on the German side. The intercepts are to be found in the UK National Archives, DEFE 3/573 – Intelligence from intercepted German, Italian and Japanese radio communications, WWII, CX/MSS/C 1-533, 1942 Sept 16-1945 May 15.

What is notable is the discrepancy in the height given at which Marseille baled out of his plane, compared to the report by Lieutenant Moritz above.

Following neither reported in CX/MSS nor signalled abroad

On 30/9 Fliegerfuehrer AFRIKA reported the death of Hptm. MARSEILLE, Staffelkapitaen in JG 27. He was not killed by enemy action. His engine caught fire and he baled out at 3,000 m. His parachute failed to open and he crashed at 0940/30/9 7 km south of the mosque at SIDI ABD EL RAHMAN, in his own territory. He was flying a Messerschmitt 109G.

Following neither reported in CX/MSS nor signalled abroad

His engine began to smoke from unknown causes over the front area, at 6,000 metres. He then glided towards our territory, during which time the Geschwader[8] control heard him speaking continuously. The enemy did not interfere. MARSEILLE’s voice was perfectly clear. He supposed himself that his engine was on fire. He let his companion in the Schwarm[9] guide him as the cockpit was full of smoke. Flames were first seen as he baled out, which he did at 3,000 metres 7 km. S of SIDI ABD EL RAHMAN ….. (several sentences illegible) …. The a/c was burnt out. Engine and parachute have been found. Funeral probably in the afternoon of 1/10 at DERNA.

[1] His actual rank at this time was Hauptmann, Captain or Flight Lieutenant

[2] Unusually, at the time the regiment had two heavy infantry gun companies, normally equipped with 150mm sIG33 guns, the 13th, and the 15th company. It is not clear which one is referred to here, and I do not know if both were physically present with the regiment at the time.

[3]He should also have carried the diamonds.

[4] Marseille was the Squadron CO until his death.

[5]Codename for Chief of Staff (Ia) of Fliegerfuehrer Afrika, the commander of Luftwaffe forces in North Africa.

[6]5a Squadra, the Italian air force command for North Africa.

[8]Wing, a unit composed of three Gruppen, the largest tactical command in the Luftwaffe. Comparable to a regiment.

[9]Flight. A sub-unit of a Staffel or Squadron, comparable to a platoon. The six Me109 reported by Lieutenant Moritz would have been the Schwarm on this occasion. As an aside Schwarm is a very old word, originating possibly in Sanskrit, and being very similar in German, English, and Norwegian/Danish.

Burned wreckage of Marseille’s Me109G. Vehicle in the back at the point where his body impacted the ground. Unknown photographer, courtesy of Wikipedia.