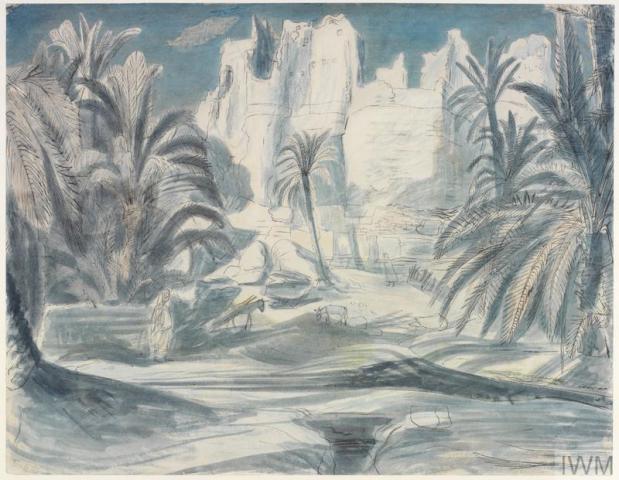 That would be Oasis Special Purpose Battalion 300, in English. This peculiarly named unit proves that the Wehrmacht was not averse to a practical joke being played on its soldiers, since they probably never got anywhere near an Oasis. Instead of being based in a romantic palm-studded Arabic paradise with tough war-like men on horses and beautiful women wearing veils, they found themselves in dusty and stony dirtholes on the Libyan-Egyptian border, until they were forced to surrender following a long siege, in January 1942. 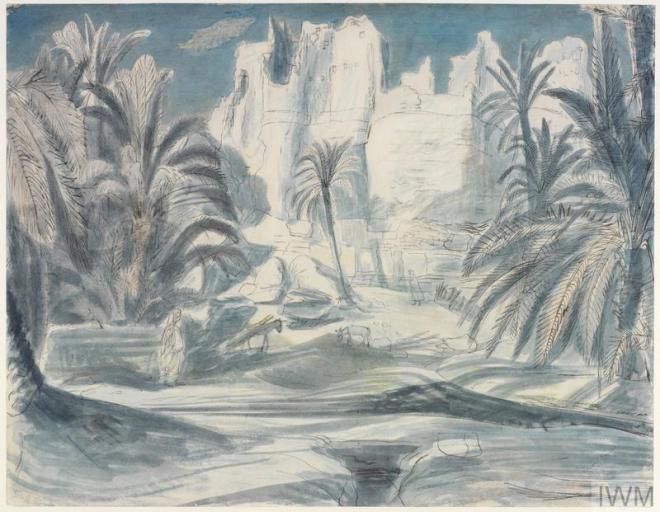 Fantasy: Siwa Oasis: the Village of Aghurmi (Art.IWM ART LD 2065) image: a desert oasis with palm trees to the left and right with ruins of a large building visible through the trees in the centre background. Two Arab men and two donkeys are visible in the centre of the composition. Copyright: © IWM.

Reality: ‘Some of the worst desert known to mankind’: INDIAN FORCES IN NORTH AFRICA DURING THE SECOND WORLD WAR (E 6940) Men of the 4th Indian Division with a captured German flag at Sidi Omar, North Africa. Copyright: © IWM.

While I originally thought the battalion had been formed for service in the border fortifications following the visit to Africa of General Paulus (of later Stalingrad fame), this was not the case. The battalion was instead formed in response to a request made by the D.A.K. HQ to O.K.H. on 30 March, for garrison troops for oases through the desert, such as Gialo or Marada. The original request asked for five independent companies. The thinking was that these companies could act as flank and rear-area protection for traffic links and water supply points.

The battalion consisted of soldiers who had been to Africa before the war. While it is often reported as part of  Division z.b.V. Afrika (later 90th Light Division), it doesn’t appear that there was much of a connection at all. See e.g. the OOB of Division zbV at this link, which has no mention of Oasis Battalion 300. In the Panzergruppe OOB it is given as being directly under command of the Panzergruppe HQ.

From its formation until just before CRUSADER Division z.b.V. was of course responsible for the border sector, and as such would have had command of the battalion. Once the division was moved to Tobruk to prepare for the assault this relationship ceased however, and the batallion remained behind in the border fortifications. The relationship was probably similar to that of Major Bach’s I./S.R.104, which was under command of and supplied by Division z.b.V., but continued to belong to 5.Panzerdivision. It would be interesting to see who first came up with the idea they were under Division zbV.

The battalion consisted of a battalion HQ, and five (on paper) identically equipped rifle companies, numbered 2., 6., 10., 12., and 13. As Frank Chadwick points out in the comments, this refelected the number of the administrative region (Wehrkreis) in which the company was formed. 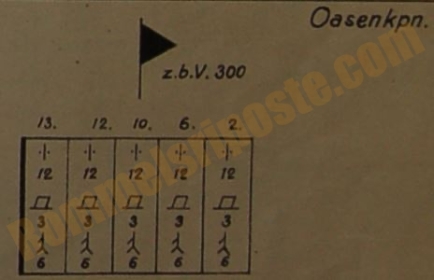 Each company had 12 light machine guns, 3 light mortars (50mm), and 6 light anti-tank rifles (7.92mm). with a reported company strength of 152 of all ranks (see here). As Frank also points out, the number of LMGs in the company is the standard infantry allocation, which was one per rifle squad plus a “floater” at platoon — three platoons with 4 LMG each = 12 guns. Thus, 12 LMG and 3 light mortars is right for a standard rifle company, while it is the number of light AT rifles which is high — two per rifle platoon instead of just one. While this was presumably intended to beef up the AT firepower of the companies, due to the 7.92mm AT rifle being obsolete at this point in the war, the battalion wasn’t strong in anti-tank firepower. In consequence, in position the companies of the battalion were supported by Italian and German artillery, including 88mm AA guns. This article at Lone Sentry is very helpful in describing the situation.

The last remnants of the Oasis Battalion 300 went into Empire captivity when General Fedele de Giorgis, the Italian General Officer Commanding Savona infantry division and the border defense sector east was forced to surrender his forces to the 2 South African Division on 17 January 1942. Depite the rather short combat history, the battalion contributed to a stout defense of the border sector, forcing a deliberate reduction in two major operations, and this created a substantial headache for the Empire forces, as I laid out at this link. Prior to that, the last organised elements of the battalion had surrendered in Sollum on 12 January, apparently.

The battalion was never reformed, and provided little more than a footnote to the overall battle.