Background
The question of Commonwealth air strength at the start of Operation CRUSADER has been the subject of some debate, with figures ranging from 600 to 1,000 planes being available to Air Marshal Tedder in Cairo. The strength statement can be found in the UK National Archives in AIR20/2021.
The Data
As the table below shows quite clearly, the total number of modern planes available to RAF Middle East was only around 800 including a few transport planes. While it is safe to presume that the vast majority of these would have been available for operations in the western desert, the low end of the 600 to 1,000 range seems more plausible, while the upper range is not even reached if all unserviceable and obsolete types are taken into account (the total comes to 950). The low end is especially reasonable to assume since this calculation has to take into account planes allocated to training or conversion units etc. In some cases, types were also used for other purposes than designed, e.g. 9 Wellingtons were used as what would now be called electronic warfare planes, and the 13 Douglas Bostons of No.24 SAAF Squadron were used as reconnaissance instead of bombers, thus not available for attack operations.
An interesting fact emerging from the data is the relationship between medium and light bombers, which at about 1:2 is much higher than I expected. One hears relatively little about the work done by Wellington crews in the Med, while Blenheims and Marylands feature quite a lot in the accounts.
The other important thing to note is of course on the fighters. By this point in the war the Hurricane II had been outclassed, and struggled to compete with the most modern German (Bf 109F) and Italian (Mc 202) designs. Unfortunately for the Hurricane pilots, both of these Axis types appeared in numbers in the desert during Operation CRUSADER. The considerably smaller number of Curtiss P-40 Tomahawks also could not compete with these Axis planes. See also this older entry on Italian fighter planes. While there had been high hopes for the next variant of the P-40, the Kittyhawk, which was introduced in January 1942 at the tail end of the CRUSADER operation, it also did not deliver on these hopes, and Empire crews had to wait for Spitfire V to arrive in numbers from the middle of 1942 to gain a combat edge over their opponents. Nevertheless, the combat capability gap was balanced by the much better supply situation of the Empire air force.
Lacking a critical capacity?
Looking deeper into the numbers, what appears interesting at first glance is the very small number of dedicated transport planes, just 21 for a theatre that spanned from the western border of Egypt and Malta to Somalia and then on to the Hindukush and the Turkish border. While I thought that it might be the case that some other orphaned detachments are not counted, I am now considering that the list is only counting combat aircraft, and that it ignores pure transport and communications planes or trainers. The 21 planes listed would have been labelled as ‘Bomber/Transport’ even though they would no longer serve as bombers, but would still be considered combat planes. These Bombays and Valentias seem to have been operated by No. 216 Squadron RAF, which later also flew Lockheed Hudsons as transport.
A further consideration regarding the relatively few transport planes in the theatre is linked to the Douglas D.C. 2. I am indepted to this excellent Dutch site on the history of all D.C.2 for making me research this more closely. Furthermore, as this post points out in reply to my request for information, a detachment of Douglas D.C.2 of No. 31 Squadron RAF operated in the western desert over the winter of 41/42. This squadron was at the time based in India, after supporting operations in Iraq and Syria earlier in the year, according to this squadron history. It can’t have been many planes though, since apparently the RAF only received 25 of the type. Some D.C.2 were lost on operations during CRUSADER. No D.C.2 appear on the list for RAF Middle East, this may of course be because the parent squadron was not attached to this HQ. Furthermore, this explanation does not hold in the case of No. 117 Squadron RAF, which received D.C.2 transport planes in October 1941 and was active in CRUSADER.
Odds and Ends
What is interesting is that there were still a number of Hawker Audax in squadron service – first flight in 1931… Or Vickers Vincent, based on the Wildebeest, designed in 1926… And of course the Vickers Wellesley, flown by No.47 Squadron in East Africa until December 1941. Also No. 1 Australian Air Ambulance flew four-engined DH86a for medical evacuation.

LIBYA. 1941-12. A CREW OF NO. 1 AIR AMBULANCE UNIT, RAAF, WHICH OPERATED WITH NO. 3 SQUADRON, RAAF. AWM.
Also of interest in this regard are the 3 B-17 Flying Fortress I, which belonged to No. 90 Squadron RAF, and which had been found unsuitable for operations over Europe according to this squadron history, with more detail at this link. It appears only 12 of the original 20 Fortress I were left after the daylight bombing experiments. Most of these then seem to have gone to No.220 Squadron RAF Coastal Command, which converted onto the type from either December 41 or January 42 to April 42.
Commonwealth Middle East Air Strength Nov.41 (Combat planes only)
I have kept as close as possible to the original formatting, only introducing the sub-totals and the serviceability rate (U/S = unserviceable). 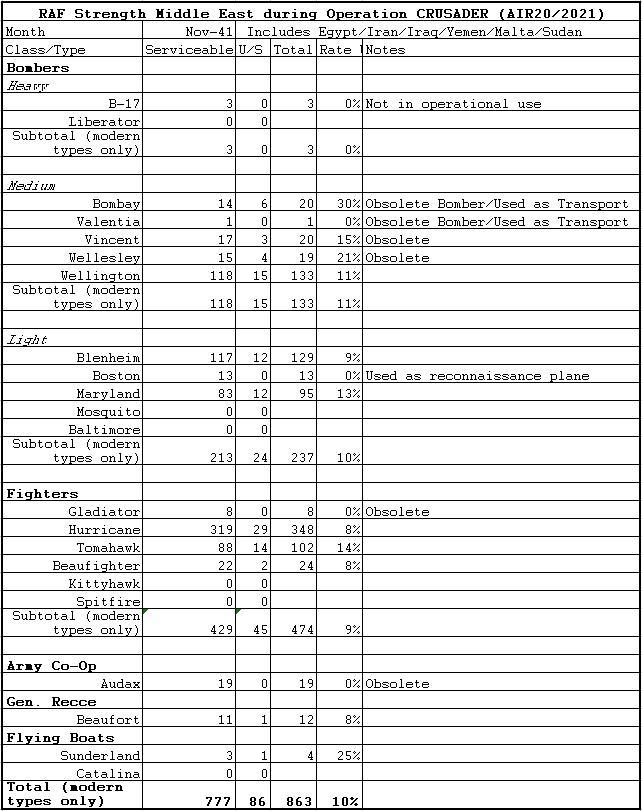 At a later stage I will expand on this by adding the information on the development of air strength over the time of the battle, and by providing information on RAF losses.