The OOB does not include the ‘bush guns’ which were captured Italian equipment used by the frontline infantry battalions. It does however include the captured 75mm, 100mm and 149mm guns captured from the Italians during Operation COMPASS, and operated by artillery units.

What is noticeable otherwise is the mix of guns. There are eight different types. What is also noticeable is the very low number of heavy calibre guns. Essentially just 4x 149mm, also the 4.5” guns and 60-pdr were also considered ‘medium’ by the Royal Artillery. The besieging Axis forces were far better equipped with heavy artillery, which would have given them a fair advantage in particular in counter battery work. 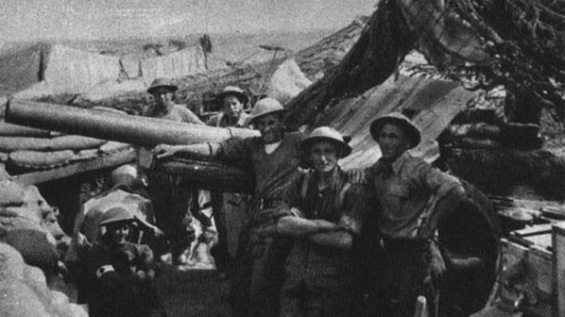 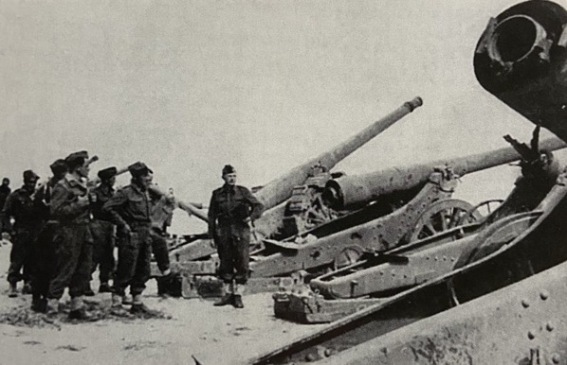 The gun total was 88 field guns of various calibres and 16 medium guns on 5 November. This compares to 72 25pdr field guns and no medium guns in a typical infantry division at the time.

The total was broken down as follows:

8x 18pdr (A.Tk. – but were used also for thickening up barrages)

4x 100mm (I count these as medium, and would presume they are captured Italian equipment. There were six of these guns still in service with TobFort in February 1942 – see here) 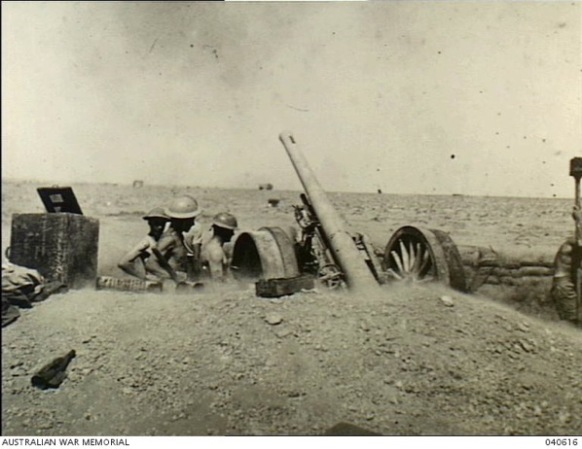 LIBYAN DESERT. 1941. AUSTRALIAN SOLDIERS FIRING CAPTURED ITALIAN GUNS AND AMMUNITION BACK AT THE ITALIAN AND GERMAN FORCES OUTSIDE TOBRUK. THIS WAS HUMOUROUSLY KNOWN AS THE “BUSH ARTILLERY”, THOSE WORKING THE GUNS WERE NOT TRAINED ARTILLERYMEN AND IN THE MAIN, WERE COOKS, ORDERLIES, DRIVERS ETC., WHO DID IT FOR THE FUN OF IT. THEIR RANGE FINDING WAS NOT ALWAYS FIRST CLASS BUT THEIR CONTRIBUTION ALL HELPED TO HARASS THE ENEMY AND THE EFFECT ON MORALE WAS GOOD.(AWM)

On 16 November, 20 new 25pdr guns were received by the fortress, which had to be assembled first. They were landed from what the war diary says was a minelayer, but probably were A-Lighters and a storeship. They were assigned as follows:

12x Polish Carpathian Artillery Regiment, where I presume they replaced the 8x 75mm and 4x 4.5″ howitzers.

8x 144 Field Regiment (where they replaced the 18pdr which went in reserve and pure anti-tank roles, and were immediately committed) The rapid deployment of these guns shows that there were no reserve field guns in the fortress.

Regarding A.Tk. guns from 149 A.Tk. Rgt, these are not mentioned in the document, but I would presume that this was a 48 gun regiment, with 3 troops of 4 guns to each battery, for a total of 48 guns. The artillery statement for 8 Army of 4 November gives this regiment 40x 2pdr and 9x 18pdr, with another 8 guns being in transit to Tobruk, which would confirm the organisation as a pure 2-pdr regiment with the 18-pdrs attached as supernumeraries to the regiment. When 144 Fd. Rgt. retired 8 18pdr guns, this would have meant there were enough 18pdrs to make up a full battery of 16 guns, similar to the other 64 gun regiments. The war diary of 149 ATk Rgt refers a few times to portees and towers, indicating that it actually operated both the 2pdr (which would have been porteed) and the 18pdr (which would have been towed).

While this indicates that this is all the AT of Tobruk this is not the case. While 149 A.Tk. Rgt. controlled the AT of TobFort, there was a considerable amount of AT guns in the three AT companies under the infantry brigades, and then the ‘bush guns’ within the infantry battalions, although their AT value would have been negligible to non-existant.

The table is reduced from the original table, I have removed the location statements, and merged troops into batteries where they had the same equipment, even if they were at different locations.