The Br.20 was one of these planes which the Regia Aeronautica had developed just a bit too early (or alternatively, WW2 started just a bit too late) for it to shine. The Br.20 came out of the same call for proposals as the Sm.79 below.  It was a modern-looking, sleek design, and reasonably fast, overall comparable to the Vickers Wellington Mk.I, of which it is a contemporary, and superior to contemporary (1936) versions of the He 111.  By 1941 however, it suffered from a relatively short range, of just 3,000 km, and a low bombload of max. 1,600kg, as well as weak defensive armament of just 3 MGs (one heavy).

The ceiling of 9,000m was quite good, given the performance of other types, both in the Italian and foreign arsenals. Given the overall payload limitation I also have doubts that you could have had max. payload and max. range. I would be interested in seeing a payload/range chart for this type. About 600 were produced, serving in all theatres with the possible exception of East Africa. There are no survivors.

Plane Recognition Entry for the Br.20 (US Government File, via Wikimedia Commons)

This is probably the best recognised combat plane of the Regia Aeronautica, because of its almost unique (for a bomber) three-engine design.  This type doubled as transport and torpedo plane as well.  Despite having three engines it was actually less powerful than the Br.20, but could carry slightly more payload, at slightly lower speed of 430km.  Defensive armament was slightly better 4-5 MGs, 3 of which heavy), but max. bombload considerably less, at only 1,200kg.  Range was also considerably less, at only around 2,000 km, and the ceiling was considerably compromised compared to the Br. 20, at just 7,000m. From the Bundesarchiv via Wikimedia Commons

Not much needs to be said about the Ju 87. The Regia Aeronautica flew the R variant in North Africa, with quite a lot of success.

An article about the Picchiatelli over Malta can be found at this link. There are two German Stukas surviving.

This was another three-engine design, and again one suffering from short range. Ceiling at 7,500m was reasonable, and bombload (external and internal) of 2,200kg considerable, and four MGs for self-defense.  The top speed was also good for the time, at 458km/h, showing the heritage of speed-racing seaplanes which spawned this plane. It was built on a wooden structure, with a very unusual tandem arrangement for the pilots, and apparently had very bad flying characteristics. Nevertheless, some examples of this type served in a specialised strategic reconnaissance role in CRUSADER. There are no survivors. 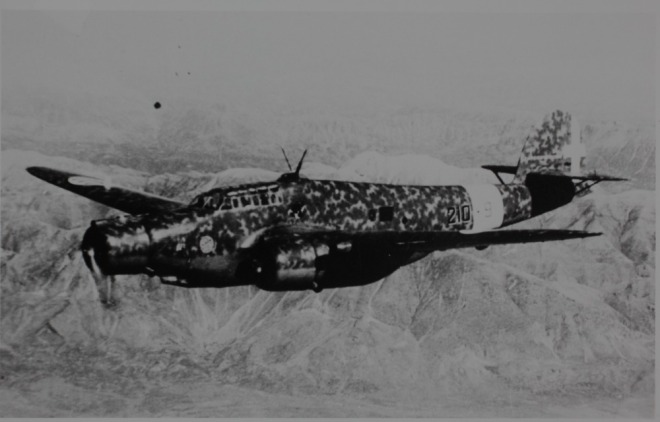 See previous article at this link.

The final article will be on reconnaissance and liaison planes.