One of the problems faced by the Allies was to hide the fact that they had read a message, while still taking advantage of it. Otherwise there would be the risk that a reasonably smart enemy would quickly figure out what was going on, and change cypher methods. In the Mediterranean, what happened was that reconnaissance planes were sent out, often from Malta, to ‘discover’ convoys that had been reported in ULTRA. This way the Axis had a good explanation why the convoy was discovered, and would not get suspicious. The story below shows the wisdom of this approach. 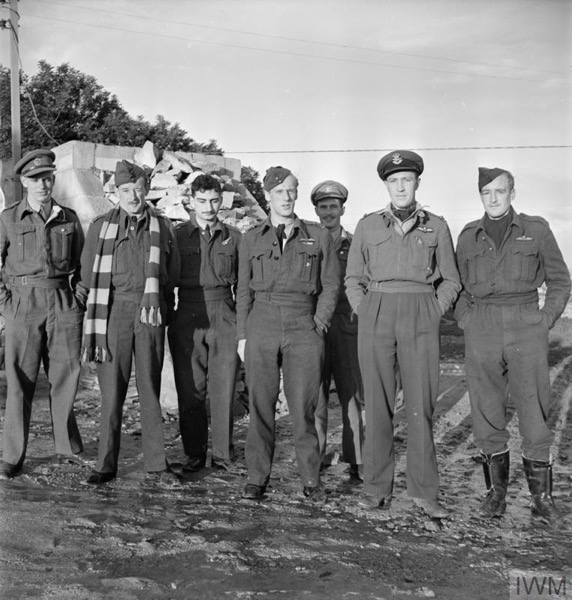 Adrian Warburton and fellow air crew from No. 69 Squadron detachment on Malta. Amongst other tasks, planes from this reconnaissance unit were often task to cover up for ULTRA intercepts, being sent out to ‘discover’ a convoy where the route was known by radio intelligence. IWM.

Just before the time of CRUSADER, suspicions had been raised amongst German naval staff about the repeated failure of U-boat patrol lines in the Atlantic in engaging convoys. On 19 November, the war diary of Adm. Dönitz, Commander of the German submarine fleet, the translated version of which has been transcribed on U-Boat Archive, notes:

A likely explanation would be that the British, from some source or other, gain knowledge of our concentrated dispositions and deviate thereby encountering perhaps boats proceeding singly.  This knowledge could be gained by the enemy:

2) By deciphering our radio messages.  This matter is being continually examined by the Naval War Staff and is considered as out of the question.

In other words, there was complete faith in the security of the German naval encryption system at this time. While this unbreakable security may have been the case for the Kriegsmarine (although I doubt it), what was not considered was the repetition of naval signals or sending of related signals through other networks, e.g. the Luftwaffe, or by Allies. This was of course not as much of an issue in the Atlantic, but it certainly was in the Mediterranean. 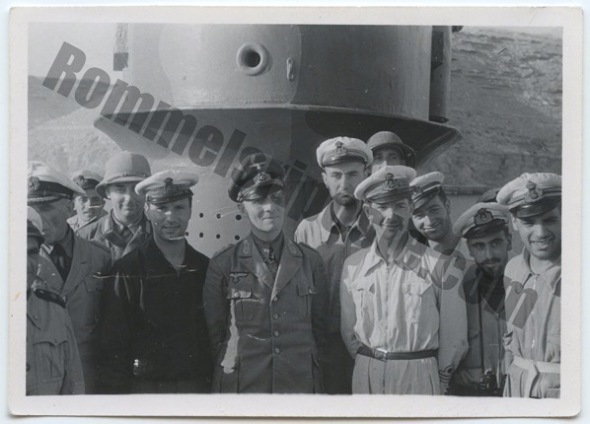 Rommel during a photoshoot with Regia Marina Submarine officers, most likely Zoea during her first trip to Bardia in May 1941. Rommelsriposte.com Collection.

About 10 weeks before the above diary entry, Panzergruppe Afrika wrote to the German military attache in Rome, General von Rintelen, regarding shipping between Italy and North Africa[1]. The memo covers a range of issues relating to harbours, distribution of shipping space between the Axis partners, and also radio security, or rather the lack thereof on the Italian side. It states:

Shipping losses on the route to Tripolis are especially high. […] Furthermore the English (sic!) without doubt gain their information from radio traffic, which gives them a fairly clear picture about the departure and the individual situation of ships (see attachment). Regarding a reduction of radio traffic, compare minute of the meeting between General Bastico and General Rommel on 17 August 1941, sent by this Ia Nr. 25/41 Geh.Kdos. Chef – Sache on 18 August 1941.[2]

Furthermore it does not seem impossible that the English are using espionage (Naples?).

The attachment referred to above is of great interest, since it shows a number of cases where the ULTRA guard seems to have been let down sufficiently to arouse severe suspicions on the Axis side. It is quoted in full below:

1) The following submarines were discharged in Bardia up to 30 August:

a) Arrival of Zoea was repeatedly moved. Announcement on German and Italian radio net. According to report DAK English air raids happened every evening on the announced arrival days. The locally ordered discharge at 5 AM on 10 August remained undisturbed until the departure.

b) Corridoni arrived as previously announced on the evening 12 August. From the start of discharging rolling enemy air raids occurred.

c) Arrival time of Atropo was foreseen for 15 August, but was moved. Nevertheless on the evening of 15 August a heavy English air raid took place. Atropo then arrived without announcement on 16 August and could be discharged without disturbance.

a) For 0900 hours 5 August the arrival in Bardia of the supply steamer Cicilia had been announced. As was found out later, this announcement was based on an error. Cicilia was meant for Benghazi. Again in this case on 5 August a particularly active English air activity reigned over Bardia.

b) According to Geh.Kdos. of Chief of German liaison staff at the Italian navy No.4 558 on 24 August at 0300 hours AM steamer Bellona was to arrive at Bardia. DAK reported for 24. August 0400 hours AM english air raid on harbour. The sea area outside the harbour was systematically illuminated.

3) It is of particular note that the English air raids always happened at the times of day notified in the announcement transmitted on the Italian radio net. (report DAK)

4) The Italian radio traffic is being supervised by German listening posts. According to Major SINGER, radio interception analysis office Southeast, even after three changes, every Italian key was decyphered.

It is clear from this that the suspicion was squarely on the Italians. What is also appears clear is that somewhere something had broken down in the protection of the radio interceptions (whether ULTRA or not), and the measures taken to intercept relatively unimportant Axis traffic into Bardia put at risk the capability of the Commonwealth to listen into Axis radio nets. Additional protection would probably have been easy, by just laying on more attacks at random times, to prevent a pattern from forming. But of course, air assets came at a premium in the Western Desert air force during the summer of 1941, with demands on the few available squadrons being very high.