The list below is based on a post by User nmao on the Axis History Forum at this link.

I am sure (as is he) that it is not fully correct, but it gives a good overview of Italian medium tank deliveries to North Africa nevertheless, and by posting it I am hoping somebody maybe able to help me. The original list seemed to be from the Official History, but with a bit of research it is possible to discover a number of errors in it. Those errors I have identified by checking the unit histories on the Italian Association of Tankers I have corrected, but I am sure they are not all.

Please note the table below is provided ‘as is’, and not a definitive accounting exercise. For example, a delivery of 24 M13/40 tanks in November 1941 is missing on the AHF list (I have added it here), and some battalions, such as 9/132 seem to be far too strong, while 7 and 8/132 also seem overly strong.

What is known is that Ariete as a whole fielded 138 M13/40 on 17 November 1941, but I am missing the RECAM here which also operated medium tanks. So still many open questions. 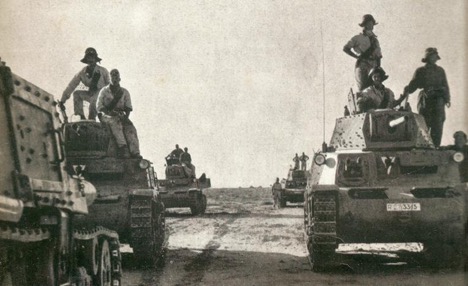 Regimental associations In terms of regiments, a quick overview is provided below. By mid 1941 4 Regiment had become the training centre in Italy, and any new crews would be affiliated to it before being posted to their destination unit in North Africa. COMPASS

All medium tanks delivered were lost. By early February 1941, 209 light tanks remained operational in North Africa. Prior to CRUSADER many light tanks had been allocated as support to the infantry divisions, while Ariete also held a substantial number. All light tanks were lost in CRUSADER and were not replaced.

133 Regiment Littorio (Mediums) This regiment was used for loss replacement of Ariete in late Dec 1941/January 1942.

135 Regiment Centauro (Mediums) This regiment is not included and I have no numbers for it.

You can download the PDF file here for better readability. Italian Tank Arrivals