At 08.00 hours 5.lei.Div. with I./Pz.Regt.5 led by Major Bolbrinker[1] (8 tanks) took Mechili. One English general[2], 60 officers, and about 1,700 men[3] were captured, an immeasurable volume of booty consisting of vehicles, weapons, ammunition, and rations fell in our hands. The garrison had received additional forces from the west in the morning and repeatedly tried to break through the encirclement. According to an Italian air report, around this time an enemy column of about 200 vehicles was breaking out, passing north by Mechili.

At 12.00 hours Lt. General Rommel ordered: “The Italian formations occupy Mechili. 5.lei.Div. secures to the north and northwest, Forward Detachment Schwerin and all arriving elements of Combat Group Olbrich to be tasked for Derna.”

Since the evening of 7 April, Lt.Col. Ponath was engaged in a heavy battle against enemy breakthrough attempts on Derna airfield. During the afternoon of 8 April he was reinforced by Fliegerfuehrer Afrika with 3 Ju 52, carrying 60 men from an AA unit and 3 2cm guns.

At 18.35 hours Lt.General Rommel arrived with the van of Forward Detachment Schwerin on Derna airfield. Lt.Col. Ponath reported to the Commander: “Airfield Derna and Via Balbia reached evening 7 April. Great booty of weapons, ammunition and petrol, about 800 prisoners, including many officers and four generals[4]. Div.Brescia has reached Derna town.[5]”

Marching group Olbrich did not come to enter the battle at Mechili. At 10.00 hours it stood with its most forward elements still halfway B. el Beter – Mechili. Major Schraepler with elements Corps staff, one AA MG company[6], one AT company, elements I./Flak 18 and Signals Battalion Libyen reached Gadd el Amahr, elements of marching group Taetz and Div. Ariete Tengeder. All marching groups had to be sent rations in repeated operations of air transport units.

Further elements of the command squadron of the Afrikakorps were sent to Derna. The Ia with a radio section remained in Agedabia.

The Italian high command received the request for accelerated bringing up of Div.Trento and the remainder of Div. Brescia.

[1]He received the Ritterkreuz for the action. 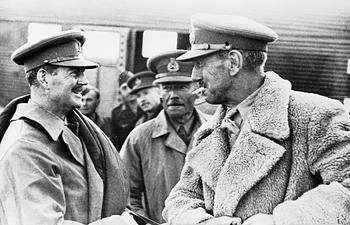 [3]This was most of 3rd Indian Motor Brigade, arguably the most luckless formation on the Empire side in the desert, and the HQ of 2nd Armoured Division. Some detail on the action can be found at this link.

[4] The generals included Lieutenant-General Philip Neame VC, (centre on the picture above), and Lt.General O’Connor (rear centre), the victor of the COMPASS operation and the pursuit and destruction of the bulk of Italian forces just a few weeks before.

[5] This essentially joined the north-eastern push via Mechili and the eastern push via the Via Balbia and the Jebel Akhdar, but the encirclement closed too far west and allowed the main Empire forces in the Jebel as well as most of the remnants of 2nd Armoured Division to escape into Tobruk.