Showing that German S-Gerät was not perfect, here is a report by Regia Marina Tp. Orsa about an attack and confirmed sinking, that cannot be corroborated and therefore has to be dismissed as an error.

The Orsa-class was a class of four torpedo boats, developed from the Spica-class, with a clearer focus on anti-submarine warfare and escort duties than the earlier boats. Two of the four survived the war (the other two were scuttled at the Armistice in September 1943), modernized, re-designated as frigates, and served the Marina Militare until the mid-1960s.

In the records of the German navy command South (Marinebefehlshaber Süd – Admiral Weichold), there’s a telegram from a chap called Ahrens, who was assigned to the Regia Marina‘s torpedo boat Orsa, about a successful attack by Orsa on a submarine. Based on the report about the attack in the same file, Orsa was equipped with the German sonar equipment and depth charge launchers (see this older post), and Mr. Ahrens was an offiicial responsible for the final hand-over of this equipment to ships’ crews, and participated in the mission.

The text of the telegram is as follows:

The separate report states that the attack happened on 7 January, at 09.45 hours. The target was identified as a submarine because of the very clear echo. The visual confirmation of success consisted of an oil spot on the surface, coming after a depth charge attack, an air bubble, and wooden pieces coming up. 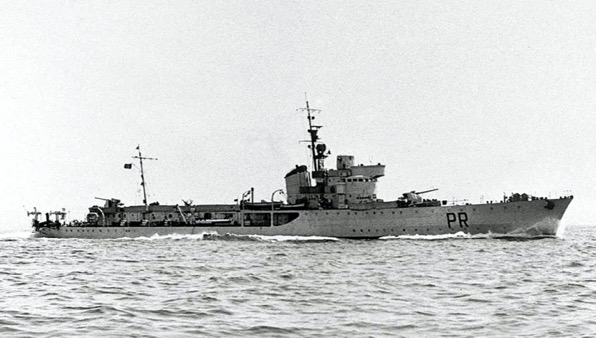 Now here’s the puzzle. No submarine has been reported lost in the area on the 8 January or on the preceding days. One submarine went missing during this period, HMSub Triumph, but that was far away from Trapani, in the Aegean. More detail on this can be found at this link. HM/Sub Triumph was quite an interesting boat, having been involved in Operation FLIPPER, the raid on ‘rommel’s HQ’ (actually offices of the Chief Quartermaster Panzergruppe). And her successor in name was busy again in Libya during the intervention post-Ghaddafi…

As can be seen, even though visual confirmation of the supposedly successful attack was obtained, there was no submarine. One boat that was in the area just prior to the attack was the famous HMS Upholder, which on 5 January 42 had sunk Regia Marina sub Ammiraglio Saint Bon during a supply mission for North Africa, but she had returned to Malta.