Convoy operation MF 3 was a combination of two two-ship convoys, both from Alexandria to Malta, MW 8A, and 8B. from 16 January to 21 January 1942. Full detail can be found at this link. They had substantial escort support, of a total of 14 destroyers and four light cruisers, indicating how severe the situation in the Mediterranean was viewed by the Royal Navy’s command at the time. Out of convoy MW 8A, the Norwegian freighter Thermopylae of 6,655 GRT (details including a detailed account of her loss and pictures at this link) was hit off Derna on its way to Alexandria, after being detached for technical trouble. She had 30 crew, and 336 troops from 65 LAA Regt, with 16 Bofors 40mm AA guns and 10 tanks embarked to reinforce the garrison. Reports about losses are conflicting, ranging from 33 to 124 men who were killed in this attack and the subsequent rescue operation.

No other damage to either of the merchants in the convoys was reported, although the L-Class destroyer HMS Ghurka went down after being torpedoed on the outbound journey off Sollum by German submarine U 133. The three freighters reached Malta with their substantial supplies and reinforcements, and they were crucial in enabling the island to hold out during the siege. A comment on the Malta GC blog (at this link – many thanks to Robert Dimech) gives the surviving cargo as follows:

The weather at the time was quite severe, so bad in fact that one of the escorting destroyers, the Dutch HNMS Isaac Sweers, had to return to Alexandria with weather damage. An important strategic advantage for the operation was the air cover which could be provided from Cyrenaica, which was still under control of the Commonwealth at the time. 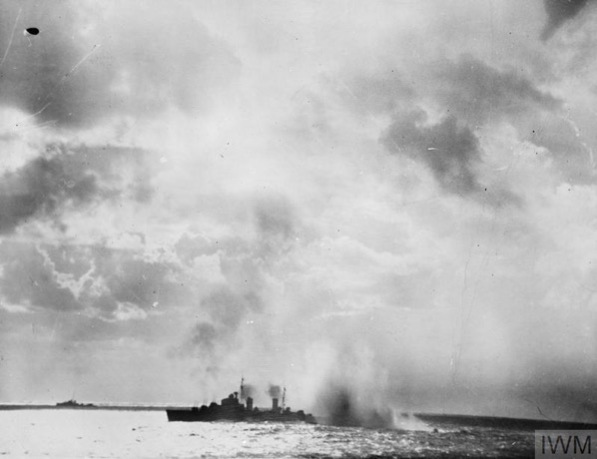 A huge bomb bursting just astern of HMS NAIAD during Operation MF3. Possibly the attack at 1245 hours. IWM A9577

An ULTRA intercept (CX/MSS/640T24) contains the German air command report on the attacks. Punctuation and spelling as in the original, notes indicated in brackets.

Heights of attack during operations carried out against ship targets on 18/1 and 19/1/42 were as follows:

0739 hours: 1 Ju. 88 carried out level bombing attack against destroyer in position 23 degrees East 3488: Bombs released at 2,500 metres, results not observed. Owing to having received hit by anti-aircraft fire no dive bombing attack was carried out.[4]

0945 hours: Level bombing attack from 3500 metres carried out against warships in position 23 East 3316. Result not observed. Very heavy anti-aircraft fire of all calibers.

[1]SULTAN was the code name for the Air Commander Greece, the 1C position was the staff intelligence officer. A.O.C.-in-C. South (Air Officer Commanding in Chief) was Field Marshal Kesselring.
[2]This attack was not aimed against the two convoys.
[3]This must have been MV Thermopylae – there is good detail on her including pictures at this link.
[4]It is noteable that the fact that an explanation was submitted as to why the far more effective dive-bombing attack was not carried out.
[5]This was most likely the remaining escort of Thermopylae, which included the AA cruiser HMS Carlisle.
[6]What is notable about all of the final three attacks is the high level of bomb release, and the emphasis on the heavy defense encountered.