The Commander assessed the situation on 10 April:

“I am convinced the enemy is retreating, we have to push after him with all forces. Target to be made clear to every man is the Suez canal. To prevent a breakout of the enemy from Tobruk, an encirclement has to be pursued by all means.”

A.A.3, of Forward Detachment Prittwitz which, together with elements of Brescia was in the area 47-35km before Tobruk during the morning, was sent towards the Via Balbia east of Tobruk via Acroma – el Adem. At 12.00 hours it encountered enemy at El Adem (100 – 850 motor vehicles, 2cm AA and heavy tanks).[1]

The mass of Forward Detachment Prittwitz should at first attack the enemy in Tobruk from the west, to then follow A.A.3 after being relieved by Brescia. At 11.00 hours the commanding officer M.G. Batallion 8 reported to the Commander  at km16 ahead of Tobruk: “M.G.8 made contact with the enemy, 2 heavy tanks destroyed, battalion takes position and prepares attack to tie him down.”[2]

When driving ahead towards the frontline at 12.00 hours on 10 April, Major General von Prittwitz died 16km west of Tobruk in the forward line.[3] The command of the Forward Detachments was taken over by Lt.Col. Graf Schwerin. 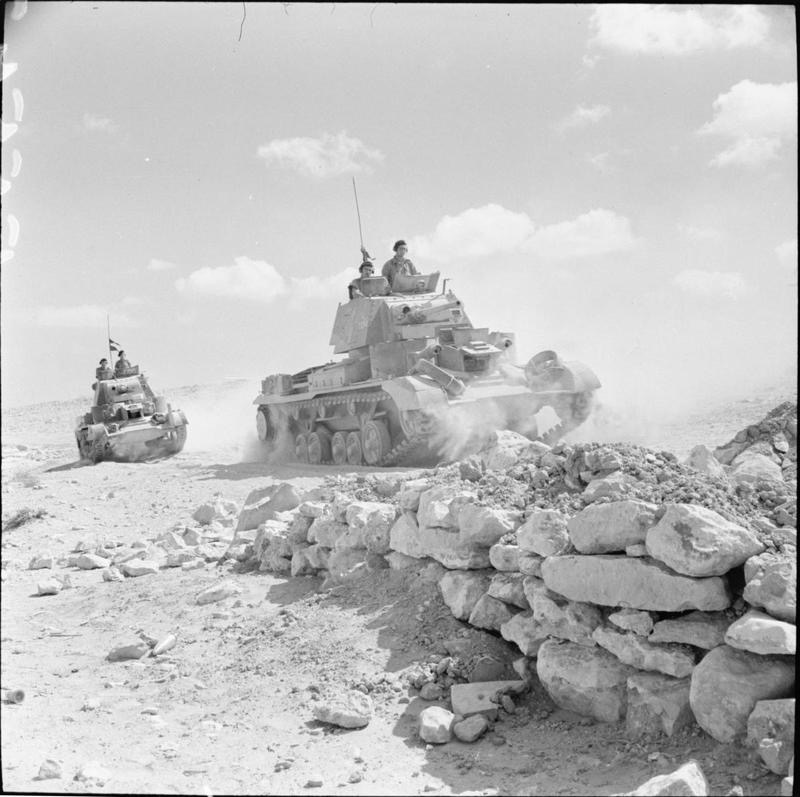 Early Cruiser tanks of the Tobruk Garrison on Exercise. IWM

The most forward elements of Div.Ariete were noted by reconnaissance plane at Tengeder. It received the order to advance on El Adem to be at the disposal of the Commander, jumping off immediately, and to send forward there a mixed, combat-capable battalion, to accelerate the move. Arrival latest on 11 April.

I.Flak 18 and 2./Pz.Jaeg.33 stood at the track junction Mteifel – el Chebir at 08.00 hours and urgently requested supply with petrol and rations.

The Detachment had been without water for 24 hours.

The command post of the Afrikakorps was moved to the Cantoniere Aim el Gazala, the combat airfield of 2./(H)14 to the nearby airfield. The Ia of the Corps arrived at the command squadron midday, coming from Agedabia – Derna.

[1]These were likely elements of 2nd Armoured Division, but it is not clear where the tanks came from.

[2]It is likely they hit the resistance line of Tobruk.

[3]In the general chaos, where the local situation was unclear, the car with the General had passed the most forward Axis position without noticing, and was taken under fire by Australian guns. Both he and his driver were killed.